The 5 Most Hard-Working Animals

Some animals work non-stop throughout the day, while others are less active. Among these hard-working animals are birds, fish, rodents, and invertebrates. 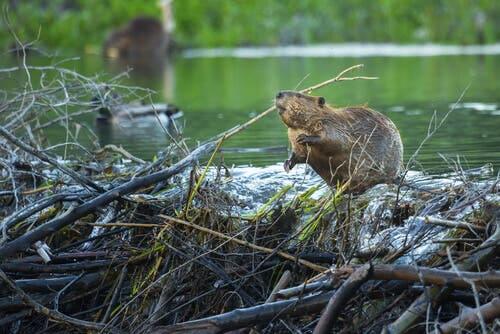 We’re not referring to species that humans have domesticated for agricultural tasks. Instead, we’re talking about the most hard-working animals in the wild. Let’s take a closer look.

Which animals are hard-working?

Some animals can work tirelessly for days, lift significant amounts of weight, walk for miles, or even build their own houses. These are the most hard-working animals that exist:

These semi-aquatic rodents originated in North America and Eurasia. However, they have moved into other areas as well, such as South America. These creatures are a prime example of hard-workers in the animal kingdom.

Beavers have the ability to build dams in streams and rivers, and they use these dams as comfortable burrows for their large families. To build their homes, they use branches and trunks that they cut down themselves using their sharp teeth.

These dams also help control flooding and the movement of pollutants better than in areas where beavers don’t live. However, not all of the beavers’ habits are beneficial for the environment.

Ants offer us a prime example of teamwork and sacrificing themselves for their families. Related to wasps and bees, these insects create their own houses with things they find in nature. They also work hard to keep their homes in good condition and keep predators at bay.

In fact, their working hours are so extensive that they hardly rest. Worker ants spend a large part of their lives awake. They feed the larvae, repair the anthill, looking for food, and defending against strangers.

Earthworms play a very important role in ecology. They eat organic waste and transform it into fertile soil full of nutrients. However, to do this, they need to spend hours and hours digging tunnels through the earth and eating as much as possible.

In fact, these animals can ingest 90% of their weight in a day. Then, they can excrete up to 60%. And one of the most curious things of all is that these creatures have no teeth! Instead, they use a very efficient digestive system that includes a sucking mouth and large intestine.

This is a whole family of colorful fish with more than 500 different species. They have a very tiring task. These fish clean up parasites that accumulate in coral reefs. However, that’s not all they do. Sometimes, they also remove the remains of fins, mouths, and tails of other marine animals.

Without a doubt, wrasses are one of the most hard-working animals on the planet. This is because they hardly ever stop. Their mouths are like vacuum cleaners that clean everything they touch. They are friends to all fish and their work pays off!

We couldn’t leave male bowerbirds off the list of the most hard-working animals. Their work is really worth admiring. To attract a partner, male bowerbirds build a very special nest with leaves, branches, and sticks that they gather from their surroundings.

Once the nest is finished, the bowerbirds decorate it! They use flowers, snail shells, feathers, fruits, stones, and even small pieces of plastic or glass.

They spend hours choosing objects to place in their homes. Also, if any element moves while they’re gone or the wind blows something away, they put it back where it was.

However, the collection and placement of objects don’t follow a specific pattern. In fact, no two nests are the same. When it’s time to mate, the female bowerbirds inspect the nests. Then, they choose the nest they like the best – bad designers can be left without a partner!

Working Dog Breeds – Loyal and Hardworking
When we think of a dog, we either envision a beautiful puppy playing with our child. However, there are some working dog breeds. Read more »
Link copied!
Interesting Articles
Hamsters and Rodents
How to Prevent Heat Stroke in Hamsters