Jellyfish are invertebrate animals with a bad reputation, but that doesn't stop them from being fascinating creatures. Discover 6 interesting facts about jellyfish. 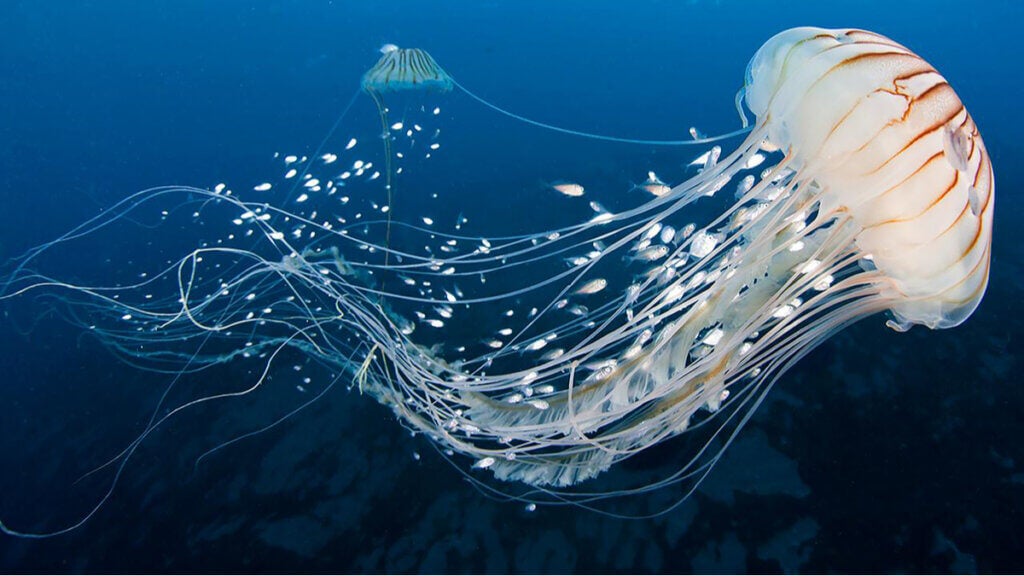 Despite their bad reputation during the summer season, jellyfish are incredible animals. Even so, many characteristics of their morphology, biology, and their way of life are often completely unknown to us. With that in mind, we want to share 6 interesting facts about jellyfish.

Jellyfish can be seen along the coast during the summer, with rising temperatures, but the truth is that they can live at different depths and in various climatic ranges. These impressive living beings inhabit all the oceans of the world. If you want to know more about them, keep reading.

Jellyfish are marine animals of the cnidaria group, which corals and anemones also belong to. These invertebrates have a bell-shaped gelatinous body, from which long stinging tentacles hang.

These fascinating invertebrates are ancient animals that have been on our planet for a long time, since their oldest fossil records date back to about 500 million years ago, during the Cambrian Period.

There are surely many things you don’t know about jellyfish. Marine life is very different from land life and, because of this, we often miss out on details about the fascinating creatures that inhabit the aquatic environment. In the following paragraphs, we’ll present you with six interesting facts about jellyfish.

Jellyfish aren’t born with the typical shape of a swimming jellyfish with tentacles. Surprising as it may seem, the life cycle of the same species alternates between different forms of life.

Most cnidarians have one life phase attached to the substrate, called a polyp, and another life phase where they are free, as jellyfish. The polyps are sessile, cylindrical in shape, and are divided by germination into small efirs.

Efirs already look similar to small jellyfish and swim freely with rapid contraction movements. As they grow, they become jellyfish that reproduce sexually, giving rise to a small larva or planula, which anchors to the seafloor and forms a polyp that begins a new cycle.

2. Jellyfish have no brain or heart

The nervous system of jellyfish consists of a very simple neural network that allows them to coordinate their movements and respond to stimuli, but they don’t have a brain itself that regulates their functions. Nor do they have a circulatory or respiratory system, since the diffusion of oxygen occurs at the tissue level.

Even so, it seems that these animals show brain functions such as sleep, which may indicate that sleep is a very preserved function evolutionarily. Researchers at the California Institute of Technology (Caltech) discovered this when studying the sleep patterns of Cassiopea jellyfish.

The main part of their body, called the bell, is made up of two thin layers of cells with watery, inert material in between. Of course, it’s difficult for a living being to be simpler than a jellyfish.

4. Why is its sting dangerous?

Not all jellyfish sting, but those that do can cause very painful injuries. The sting is actually caused by the tentacles, which contain stinging cells called cnidocytes.

These cells are exclusive to cnidarians -as their name suggests- and secrete a stinging substance for defense against predators and for capturing prey.

If we observe a sting from a jellyfish in slow motion, we can see that the cnidocytes work like a spring, since they generate a discharge from a piercing filament that sticks into the victim’s skin like a poisonous dart. Dead jellyfish still contains the ability to sting, so it’s important to be extremely careful when handling them.

Even so, as we’ve already said, not all jellyfish sting. There are places in the world where you can swim peacefully surrounded by millions of golden jellyfish without getting hurt, like in the Palau Islands.

The Cyanea capillata species, better known as Lion’s mane jellyfish, is the largest jellyfish in existence. The longest specimen had a body of about 70 feet in diameter and tentacles that reached 120 feet and was found off the coast of Massachusetts in 1870.

Most jellyfish have a life span that varies between species, from a few hours to several months. However, there’s one exception. Turritopsis nutricula is the only species that can reverse the phases of its life cycle thanks to the ability of its cells to dedifferentiate into a stem cell.

The species is able to return to its polyp phase by starting the cycle again.


Without a doubt, you weren’t aware of many of these interesting facts about jellyfish. Now you know a little more about these prehistoric beings that even today continue to fascinate the scientific community.
Porpita Porpita, the Blue Button Jellyfish
You may think that the blue button jellyfish is a jellyfish, they do look like one, and its name causes some confusion. They're not jellyfish at all. Read more »
Link copied!
Interesting Articles
Fish
The 4 Types of Substrate for Aquariums