5 Largest Rodents of the Animal Kingdom

When you think about the rodent family, you probably imagine very small animals, like hamsters and mice. However, this family also consists of specimens that measure some three feet! Today, we'll look at the largest rodents of the animal kingdom. 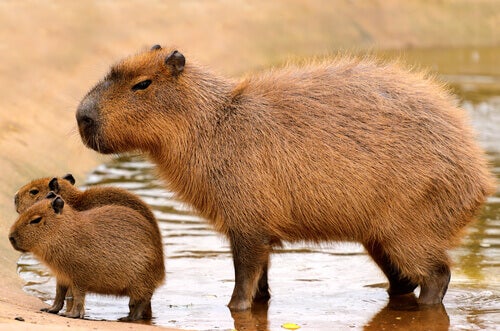 The hamster, squirrel, and gerbil are quite well known, and very small too. But did you know that there are very large rodent species as well? Although they don’t look like one another, they have certain characteristics in common that are worth noting. We’ll tell you more about the largest rodents in the animal kingdom in the article below.

What are the largest rodent species?

The Rodentia family is much larger than you think and they all share one characteristic. That is, they all have sharp incisor teeth, which allow them to gnaw on wood and fruit, or even bite when they’re in danger. The largest rodents in existence are the following:

The capybara–which appears in the main image of this article–is the largest and heaviest rodent species in the world. It prefers tropical and temperate climates near rivers, streams, or estuaries, and lives mainly in Central and South America.

Thick brown hair covers its robust body and a small head. It can weigh about 110 pounds and measures about 4 feet. The teeth are white and it has four lower and four upper incisors.

The capybara is a crepuscular animal that spends the day in the mud or water to escape the heat. Then, when the time comes to sleep, it chooses any place among the vegetation, since it does not build burrows. It feeds on herbs, aquatic plants, fruits, and sugar cane.

This semi-aquatic mammal is native to Eurasia and North America. However, humans have also introduced it to the southern hemisphere, where it’s become an invasive pest. It prefers humid habitats with a good amount of trees, which serve as both refuge and food.


The wide and scaly tail of the beaver is one of its most recognizable traits, as well as for its ability to build dams in streams and rivers. Adults can weigh up to 35 pounds and measure about 10 inches (not including the tail).

The four incisor teeth of the beaver are sharp, strong, and orange in color. With these teeth, it’s capable of cutting a 12-inch piece of wood in 15 minutes.

The porcupine is another one of the largest rodents in the world and lives in warm regions of Africa and southern Europe. The long black and white barbs that cover its body make up its main feature. The animal uses these barbs as a defense mechanism when it senses it’s in danger.


The porcupine is medium in size–about 3 feet long and weighs about 33 pounds. Its head is small and it has two pairs of incisors protruding from its mouth. These allow it to feed on roots, tubers, and vegetables.

This rodent is a very quiet, reserved animal that doesn’t defend itself except when necessary. It also has solitary habits or forms small family groups. It hides in burrows that it digs itself and goes out at night, taking advantage of its well-developed sense of smell.

This animal is also known as the Patagonian cavy, Patagonian hare, or dillaby–although it’s not actually a hare. Rather, it’s one of the largest rodents in the world, weighing up to 36 pounds. It’s an endemic animal of Argentina, which lives in steppes, deserts, and plains.

It has long, strong legs that allow it to run at high speed when being chased. The mara is diurnal and herbivorous. What’s more, it’s monogamous (something rare in rodents) and each couple has a territory of about 40 hectares. Every year the female gives birth to six young in self-made underground burrows.

Also known as the nutria, it looks very similar to the beaver. This mammal lives in southern South America, precisely in wetlands, lakes, and streams.

Quite large – weighing about 22 pounds and measuring 2 feet – it has a dark brown coat, grayish snout, and long light whiskers. The incisor teeth – two on top and two below – are orange. In addition, it has a long, scaly tail that allows it to swim without problems.

Coypus reproduce annually once they reach the first year of life. Gestation lasts 19 weeks and each litter has about six offspring. It’s interesting to note that the female can suckle her pups while they swim, since the breasts are located on the sides of her belly.

5 Species of Hamster
Hamsters are very popular pets, but not many people realize that there are several domestic species of hamster and that each one has a different character. Read more »
Link copied!
Interesting Articles
Hamsters and Rodents
Do Hamsters Hibernate?

Hamsters and Rodents
Differences between Gerbils and Guinea Pigs

Gerbils and guinea pigs are great pets who've found a place in the hearts of many generations. However, those who've…