Although they're very popular pets, many people mistakenly believe rabbits belong to the rodent family. However, rabbits aren't rodents. 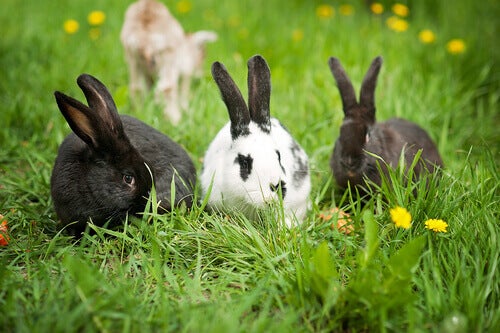 Rabbits are one of the most popular pets you can have. However, despite how well known this animal is, we have to clarify quite a common mistake that people make: rabbits aren’t rodents.

Now that we’ve stated that rabbits aren’t rodents, we’re going to tell you what rabbits are so you can see how they differ from rodents.

Rabbits aren’t rodents; they’re lagomorphs. Until the 20th century, people considered rabbits to be rodents and not lagomorphs. However, biologists began to show the enormous differences between rodents and lagomorphs.

Lagomorphs such as hares and rabbits are placeholder mammals that have two pairs of incisor teeth. These teeth grow continuously, but the second pair of incisors is small.

Actually, tooth enamel is another feature that differentiates rodents from lagomorphs: lagomorphs have enamel on both sides of their teeth.

One characteristic that rabbits and other lagomorphs have is that their legs are covered in fur. In addition, rabbits have huge ears, which are their main form of thermoregulation.

Differences between rabbits and rodents

One of the reasons that rabbits aren’t rodents, but lagomorphs, is the fact that lagomorphs are vegetarians. In addition, they have a large digestive system, like that of horses. Therefore, a rabbit’s feeding guidelines are much different to those of rodents.

Even though both groups of animals gnaw, lagomorphs do so by moving their jaw from right to left, while rodents move theirs from front to back.

Also, their habitats are quite different: lagomorphs always live in burrows, while rodents can have other homes.

Rabbits and other lagomorphs have a so-called clef lip: the upper lip is divided in two. While this can also occur in rodents, it’s less pronounced or appears non-existent.

Rodents are also placental mammals. However, they only have one pair of incisors, compared to the two pairs that lagomorphs have. Similar to a rabbit’s incisors, a mouse’s incisors also grow continuously.

That’s why both groups of mammals need to gnaw; it wears down their teeth. So, even though rabbits aren’t rodents, people tend to confuse these two taxonomic groups because they share this characteristic.

Most species of rodents have hairless limbs and tails, which is different from lagomorphs. Another difference is that rodents are omnivores and, therefore, eat everything. Rabbits don’t.

In addition, rodents only have tooth enamel on the front of their teeth, which usually has yellowish or orange tones. This is something that we don’t see in lagomorphs.

Rodents’ fingers are positioned the other way around than those of lagomorphs. For example, a rat will have four fingers on their front limbs and five on their hind limbs.

Also, unlike rabbits, rodents don’t only live in tunnels and burrows. They can also live in trees or bushes, and they live in many more ecosystems.

So, we hope all of this has cleared up the differences between rabbits and rodents!

What Happened with Australia’s Rabbits?
The history of rabbits in Australia is a deadly example of the havoc invasive species can wreak on ecosystems. Read more »
Link copied!
Interesting Articles
Rabbits
Breeding Rabbits and Taking Care of Their Young

Rabbits are cute and great as pets so some people adopt them, while others prefer to get into the art…