The Incredible Sense of Direction of the Loggerhead Sea Turtle

Although it lives in different seas of the planet, this species nests on the shores of the Mediterranean Sea. The most incredible thing is that males - as well as females - return to the place where they were born, according to a study by the University of Barcelona. 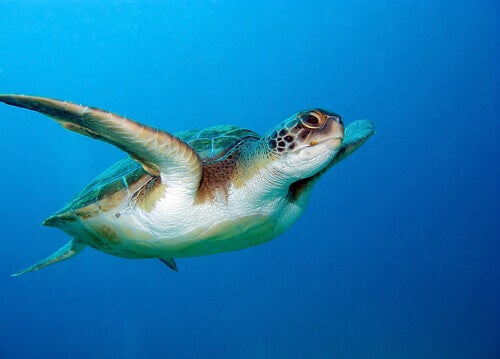 The loggerhead sea turtle (Caretta caretta) is a very particular species of sea turtle, as it’s one of the best examples of incredible migration in animals. However, recent discoveries make their migratory behavior even more amazing. This is because of the loggerhead turtle’s amazing sense of direction.

The incredible sense of direction of the loggerhead turtle for nesting

The loggerhead sea turtle is a species of sea turtle that lives in several seas around the world. However, it’s one of the emblematic species of the Mediterranean Sea. This turtle, which can live to be over 60 years old and weigh half a ton, is one that marine pollution affects the most.

In spite of this, many aspects of its biology and behavior are still unknown. At the same time, there are more and more aspects of its life that surprise us. Normally, the female loggerhead turtle lays its eggs in the eastern Mediterranean – in Greece, Turkey, Cyprus, Libya or Israel. What’s more, it always returns to the same beaches where it was born.

This behavior demonstrates the incredible orientation of the loggerhead turtle, and is well documented in females. It allows us to actively follow the movements turtles and their young make through DNA testing and the use of transmitters.

The fact that various species of turtles are able to return to their birthplace is incredible. This is even more amazing considering that turtles are one of those species where there’s no maternal care. Loggerhead sea turtle hatchlings are born when their mother is hundreds of miles away. Therefore, they must fend for themselves from the first minute of life.

Until now, experts knew little about the behavior of the males of this species. They believed that male loggerhead turtles reproduced with females from different areas, and that they weren’t at all related to their area of birth. However, a research team involving the University of Barcelona seems to have demonstrated the opposite.

The teams discovered that males also display so-called philopatry. In many cases, male loggerhead sea turtles also exhibit orientation, and return to the areas where they were born in order to reproduce.

One of the reasons for the lack of knowledge about loggerhead orientation in males is the fact that mitochondrial DNA, which is linked to maternal inheritance, is frequently used as a marker. So, the use of new DNA markers has made it possible to discover the secret life of loggerhead sea turtle males.

However, philopatric behavior is not the only thing that explains the behavior of this species. And the truth is that there are opportunistic breeding areas. One of the influencing factors is that, although it may seem incredible, the number of females in an area depends on temperature. That is, the sex of a sea turtle is determined by the incubation temperature of the eggs.

These adaptations to global warming are taking place in many species, and the loggerhead sea turtle itself has had to change some of its nesting sites. This has caused it to begin nesting in Spain, Italy, and other countries where it’s not common to see this species. It’s not that the loggerhead turtle’s orientation is failing. Rather, it’s just adapting to human activity.

Climate change thus joins other threats to marine fauna, such as plastics in the oceans and other contaminants and impacts of human activity. Let’s hope we can come together as a force to protect the loggerhead sea turtle and other marine species of the Mediterranean.

The Lionfish Invasion: The Mediterranean’s New Resident
The lionfish has already invaded the coral reefs of the Atlantic and now a lionfish invasion threatens the Mediterranean Sea.  Read more »
Link copied!
Interesting Articles
Tortoises and Reptiles
Impaction in Reptiles: Symptoms and Treatments

Tortoises and Reptiles
Turtles as a Cultural Symbol

Turtles represent sluggishness to some people and wisdom for others. However, other people consider turtles as a symbol of longevity. In different cultures, this reptile and their famous shells represent…

Tortoises and Reptiles
Pyramiding in Turtles

Among the various diseases that affect chelonians, pyramiding in turtles is one of the most significant. In fact, it largely depends on how we manage the animals. What is pyramiding…