The Breeding and Reproduction of Partridges

The chukar and the grey partridge are the most representative birds of this subfamily of birds. And besides their clear physical differences, both require specific conditions when it comes to their commercialization. Diet, hygiene, environment, and physical activity are all fundamental factors in the breeding and reproduction of partridges. 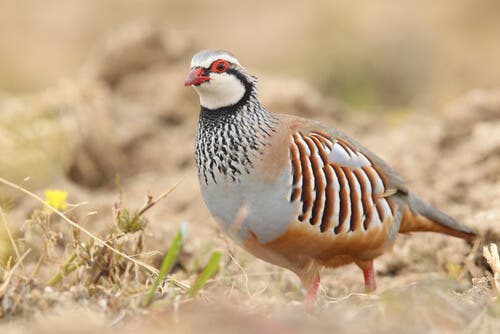 The breeding and reproduction of partridges is gaining popularity, both as a hobby and as an enterprise. While this activity requires dedication and specific care, it can be exciting and lucrative. In the paragraphs below, we’ll offer some advice for those who are interested.

The breeding and reproduction of partridges: Choosing the right species

In the wild, there are many different species of partridges. However, when it comes to professional breeding, there are two favorite species. These are the chukar partridge and the grey partridge, also known as the English partridge, the Hungarian partridge, or simply the Hun.

The differences between them have to do not only with their physical appearance. There are also differences and peculiarities having to do with their eggs and chicks.

Furthermore, these species have different forms of commercialization. This is something that anyone who wants to get involved in the breeding and reproduction of partridges must know. While you can acquire the grey partridge either as an egg or an adult bird, you can only acquire chukars as chicks that are one or two days old.

The chukar partridge originates from Asia and Europe. However, their breeding was introduced in the United States in the 1930s and is still successful today. The nature of these birds is docile and sociable, make their breeding and reproduction in captivity much easier.

This particular species possesses a small, round body with a grey back and lower chest. What’s more, they display three black stripes–one on their foreheads, one at eye level, and another under their necks. Their feet, toes, and beaks must have a reddish-orange tone.

The grey or English partridge

Grey partridges also originate from Europe and were exported by the United States in the 19th century. If we compare them with chukar partridges, they are significantly smaller and lighter.

An adult grey partridge tends to measure between 12 and 14 inches tall and weigh around 1 pound. Their plumage is grey and brown, although males possess white and brown flanks that stand out. Their wings are round and short, while their tails are small and dark brown in color.

What’s more, it’s easy to recognize them by the small brown spot in the shape of a horseshoe that they have on their lower chest. Their eggs are also easy to identify by their olive green. These eggs hatch between 24 and 26 days after their mother lays them.

The breeding and reproduction of partridges: Diet

Partridges are omnivorous birds that adopt different dietary habits according to their stage in life and the availability of foods in their habitat.

During the first three weeks of life, they need to take in plenty of proteins to aid in the formation of their bones and muscles. During this period, nearly 60% of their diet should consist of small invertebrates, such as crickets, beetles, larvae, etc.

By the time these birds reach three weeks of age, they become, for the most part, vegetarian. Between 90 and 95% of their diet should consist of plant-based foods like fruits, leaves, seeds, roots, and flowers. The remaining 4 to 10% should consist of proteins like insects and lichens.

In captivity, partridges can consume commercialized kibbles and mixtures as the foundation of their diet. However, it’s important to also feed them fresh foods to keep them healthy and well-nourished.

If you want to get involved in the breeding and reproduction of partridges, the ideal environment will depend on what you’re starting with. In other words, many breeders acquire chicks or adult birds, while others prefer to start with eggs.

Those who choose to begin with eggs will need to incubate them in an environment with a temperature between 55 and 68ºF. In this case, knowing the season in which the female laid the eggs is fundamental when it comes to guaranteeing optimal incubation.

It’s best to begin a week or two after the laying of the eggs and have an incubator. Incubation as a craft can produce little profit for beginners.

On the other hand, if you decide to start with chicks, you’ll need to give them a warm environment for the first 2 weeks. These baby birds are still unable to regular their body temperature on their own.

Ideally, you should keep their environment at a temperature of between 87.8 and 93.2ºF. To do so, you can heat the entire room or use devices like heat lamps or space heaters.

Adult birds, on the other hand, live best in temperatures of between 68 and 71.3ºF. What’s more, you’ll need to be sure to have cages with the right dimensions–a minimum of 365 square inches.

In addition, the maximum density per cage should be three adult birds or 4 chicks. Each cage should have feeders and water bowls in order to keep the birds hydrated and well-nourished.

Partridges that grow up in captivity also need to fly and stay physically active in order to keep their bodies and feathers healthy. When they spend too many hours in their cages, they tend to lose their feathers, become sick, and develop aggressive behavior.

Partridges are naturally clean animals and make a daily habit of grooming themselves in their natural environment. This keeps them healthy and keeps possible parasites and harmful microorganisms at bay.

When it comes to the breeding and reproduction of partridges in captivity, it’s important to reinforce hygiene habits. That means cleaning feeders and water bowls on a daily basis and disinfecting cages at least two times a month.

Also, it’s essential to provide them with proper preventative medicine to keep them from getting sick. Therefore, consulting with a veterinarian that specializes in caring for birds is essential.

Quail breeding has become increasingly popular in recent decades. Although they’re intelligent and sociable animals, they require a lot of…

Chickens and Birds
Learn About the Pheasant's Domestic Breeding

Anyone with chickens should know that it's perfectly possible to improve the quality of chicken eggs. Some breeds of laying…

Chickens and Birds
All About Pecking Order in the Hen House