There are many different horse breeds in Spain, but all start with the quintessential Spanish horse, the Andalusian horse. 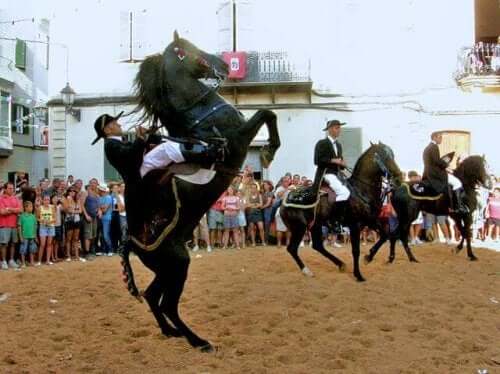 Horses in Spain date back to ancient times, and they have always been highly valued in the country. However, because of its special characteristics, the Andalusian breed stands out from the rest, and this is where the Purebred Spanish horse appears, which has led to the emergence of many other breeds. In this article, we’ll take a look at the current Spanish horse breeds.

Also known as the Andalusian horse, this is one of the oldest breeds in the world. It’s a quintessentially Spanish animal as well as being the origin of many other breeds across Europe and America.

During the time of the Umayyad caliphate, around 700 A.D, efforts were made to preserve the quality of horses and the stud farm at the Court of Cordoba was established. As a result, this ensured that the quality of the horses in the region maintained a certain standard.

In later times, particularly during the reign of Philip II, the Stables of Cordoba were created. This led to new genetic projects which led to this new breed.

As a result, breeders gathered the best stallions and mares to create what is currently the Andalusian horse or Purebred Spanish horse, one of the main Spanish horse breeds.

Characteristics of the Purebred Spanish horse

It’s docile nature and characteristics make it ideal for riding and dressage. It’s found throughout Spain, and cross-breeding with other horses has led to other breeds.

Also known as the Asturian pony, this horse is considered easy to handle. It’s a small rustic breed of horse with an average height of about 4 feet.

They have inhabited the mountain areas of the Cantabrian Mountains to the Western Pyrenees since ancient times.

This is a cross between the Andalusian horse and the French Breton, which people originally used for agricultural work. However, people currently use them for many different purposes, including fire control.

As the name implies, this is the result of a cross between the Purebred Spanish horse and the Arabian horse.

This Spanish horse breed has been preserved through history and comes from Menorca. It has a black coat and an obedient, noble character. Consequently, this makes it ideal for riding, agricultural work, and dressage.

This horse comes from Burgos in the Losa Valley, and they’re suitable for children and young riders, as well as horse riding in rural and mountain areas.

It’s one of the oldest breeds in Europe as well as one of the three indigenous breeds on the Iberian peninsula. It’s a small, rustic horse but is quite elegant at the same time. Sadly, this breed is currently an endangered species.

This is the only recognized Galician breed and they live in mountainous areas. They’re mainly concentrated in Pontevedra and Lugo. They’re a relatively small pony, with a height of between four and four and a half feet.

This is a domestic breed and has a gentle temperament suitable for competitions, riding, or equine therapy.

The Jaca Navarra is a pure native breed, and there are only 400 remaining in existence.

This breed originated in the eastern Cantabrian mountains and is a wild or semi-wild horse.

This pony has inhabited the Cantabrian Mountains since antiquity and moves in herds around the Basque mountain areas. Interestingly, the herd has a mare and a stallion that lead them.

They have a black coat and are strong, tame, and quick. As a result, this makes them suitable for riding, hunting, and jumping.

This breed comes from Mallorca and is suitable for fieldwork and riding. It has a black coat and a short neck as well as a calm temperament.

Finally, this is a native breed from Doñana in Andalusia and is a domesticated wild horse in danger of extinction.

As you can see, there’s a wide variety of Spanish breeds, each with their own strengths and style, but all originating with the original Purebred Spanish horse.

15 Fascinating Facts About Horses
Horses are some of the most beloved animals in the world. But how much do you know about them? Today, we'll give you 15 fascinating facts about horses. Read more »
Link copied!
Interesting Articles
Horses
The Essential Nutrients Every Horse Needs