Interesting Facts About the Sahara Desert

At one point, the Sahara Desert of the planet didn't present landscapes as arid as today. Rising temperatures caused the destruction of much of the vegetation, and human action hasn't helped in this regard either. 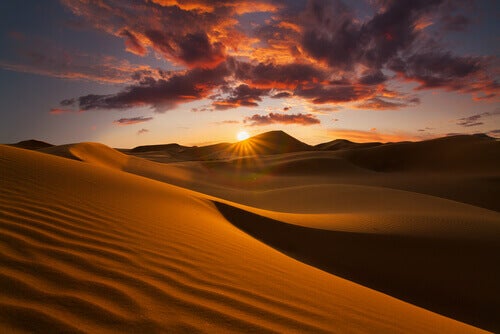 The Sahara Desert is one of the biggest and harshest ecosystems on the planet. It’s the third-largest desert in the world, after Antarctica and the Arctic, which fall into the category of frozen deserts.

Geography of the Sahara desert

The name of this desert comes from the Arabic word ṣaḥrāʾ, meaning ‘desert’, as well as its plural, ṣaḥārā’. It’s also related to the adjective ashar, which describes the reddish color of the plains without vegetation.

The Sahara Desert extends over most of North Africa. With an area of more than 5,600,000 square miles, it’s almost as large as the United States.

The Great Desert’s divided into Western Sahara, the Hoggar Mountains, the Tibesti Mountains, and the Aïr Mountains. The highest point of the Sahara is the Emi Koussi volcano, 2120 feet high.

Life before and after the desert

Thousands of years ago, the Sahara had sufficient water reserves to keep the animals and people living in the surrounding terrain alive.

Studies have shown that the Sahara was a fertile area that was once home to crocodiles. The fossils studied have led to the discovery of dinosaur species that lived in the area, such as the Afrovenator and the Ouranosaurus.

Various cave paintings also tell us about giraffes, elephants, and lions that once lived in what we know today as the largest desert on Earth. Today, neither the fauna nor the flora have anything to do with what was there in the past.

As a biodiversity hotspot, we have the Nile Valley and the northern part of the desert, where plants typical of the Mediterranean climate, such as the olive tree, grow.

The devastating climate change in the Sahara took place in 1600 BC, following a change in the earth’s axis that caused an unusual rise in temperatures. The fauna that survives in these harsh conditions consists essentially of scorpions, snakes, camels, and small rodent species, among others.


The scorpion that we can find in this area measures up to 4 inches and is one of the most venomous that exist. The largest mammal we can find is the Addax nasomaculatus, also known simply as adaxx.

Jackals and hyenas also inhabit the dunes and are the main predators of both addax and camels. The desert fox, small and compact, is another desert carnivore that lives in the tunnels it digs in the sand to insulate itself from the heat.

The problem of desertification

As we stated, the Sahara went from being an area of fertile land and diverse fauna and flora to being the arid and unpopulated area we know today. This was due to the aforementioned change in the earth’s axis that resulted in a rise in temperatures that was too high for life.

In the case of the Sahara, we’re talking about a case of desertization. This is because the degradation of the environment was due to natural causes. At present, the problem our landscapes face is that of desertification, in which degradation is the result of human action.

As stated in the 1994 UN Convention to Combat Desertification, it’s defined as “the process of land degradation in arid, semi-arid, and dry sub-humid areas, resulting from various climatic and human factors”.

The main causes that can lead to this phenomenon are:

Wildlife in Antarctica
Although it seems impossible, there are many animals that can live in the extreme cold of the white continent. Let's learn about wildlife in antarctica. Read more »
Link copied!
Interesting Articles
Wild Animals
The Fauna of the Himalayan Mountains