Characteristics of Four Types of Scorpions

There are four types of scorpions, these arachnids stand out for their large pincers and a sting with which they inject venom to paralyze their prey. 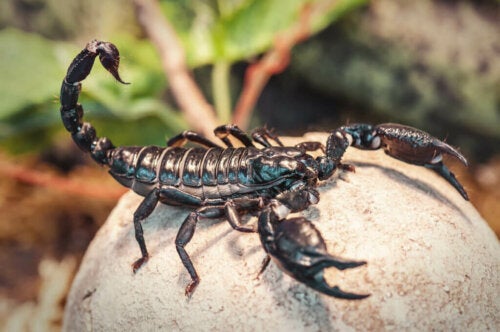 Today’s article is about four types of scorpions. These cuties belong to the order of arthropods and are easy to identify by their large pincers and a tail that ends in a venom containing stinger. Yes, it could harm a human but they seldom waste this valuable resource on us.

There’s a huge variety within the scorpion group, as there are more than 2000 different species and they range from a scale of about 0.4 to 0.8 inches in length. Find out more about the variety within this animal in the following lines.

How to identify four types of scorpions?

First of all, note that scorpions aren’t insects, they belong to the family of arachnids, a series of elongated invertebrates covered by a strong chitin skeleton.

Their bodies have two large segments, the prosoma, and opisthosoma. In turn, the first one has six segments and includes the head, chelicerae or mouthpieces, pedipalps or claws, and legs. Similarly, the opisthosoma has thirteen segments joined together. The organs are in this region, which ends in the stinger.

The tweezers or pedipalps are the most significant characteristics of these animals, along with their stingy tail:

The habitats of the four types of scorpions

Scorpions live all over the planet but there are different species in each area. They usually inhabit sandy or rocky terrains, although there’s a minority who hang around trees.

There are about 20 families of scorpions but Buthidae is the most numerous. It has over 800 species, and these are the four best-known types.

This is a small scorpion that inhabits some areas of India, Pakistan, and Nepal. They don’t grow to more than 1/2 inch in length and are dark orange with a bit of gray. This animal is considered the most poisonous scorpion species in the world due to its powerful venom and annual mortality rate.

This type of scorpion inhabits deserts and tropical forests in West Africa. It’s one of the largest scorpions in the world and measures approximately 8 inches; it’s shiny black in color.

The species is so popular in the pet trade that captures wild specimens that they’re not a part of the CITES convention. Its sting isn’t that harmful, in fact, its effects are similar to the sting of a bee.

As its name indicates, this is a light yellow scorpion that measures about 3 inches long and lives in desert areas where it digs tunnels over 3 feet deep. This is why it prefers a dark and humid environment. Its sting is rather painful but not lethal for healthy people.

Obviously, this scorpion is named after the thickness of their tail, although the rest of their body also has a bulky appearance. It’s a medium-sized scorpion, about 4 inches long, and yellow in color. It hides under the stones of the desert areas of North Africa and even among bricks of buildings. Its sting can be lethal so humans shouldn’t disturb them.

The most remarkable characteristics of these four types of scorpions

Scorpions also have other outstanding characteristics. They have exclusive organs called combs or pectens with which they explore the terrain and recognize members of the opposing sex. You can identify various species of scorpions by these combs.

Trichobians, also present in other species of arachnids, are sensory organs with which these animals can locate their prey.

Another singularity of scorpions is their fluorescence under ultraviolet light. This characteristic is a form of solar protection as scorpions evolved from marine animals.

These solitary, nocturnal animals produce venom and they reserve it for defense and predation needs.

The vast majority of scorpion venom is harmless to humans, although there are some deadly dangerous species. Scorpion venom contains various chemical substances, which vary by species and whose effects are very diverse. This is because their toxicity isn’t size related.

The venom of many species is investigated in medicine for its potential to treat diseases such as cancer. Thus, there are now some sources thanks to the study of these arthropods.

Are Scorpions Dangerous? Eight Things You Should Know
Commonly, when people write about scorpions they mainly focus on how dangerous they are. The bad reputation attributed to them is totally undeserved. Read more »
Link copied!
Interesting Articles
Invertebrates
What Are the Differences Between Octopuses and Squid?