The long-nosed horned frog, thanks to its inconspicuous appearance, is actually a very striking species. Its flattened body, its sharp head and the projections over its eyes give it a strangely foliar shape. 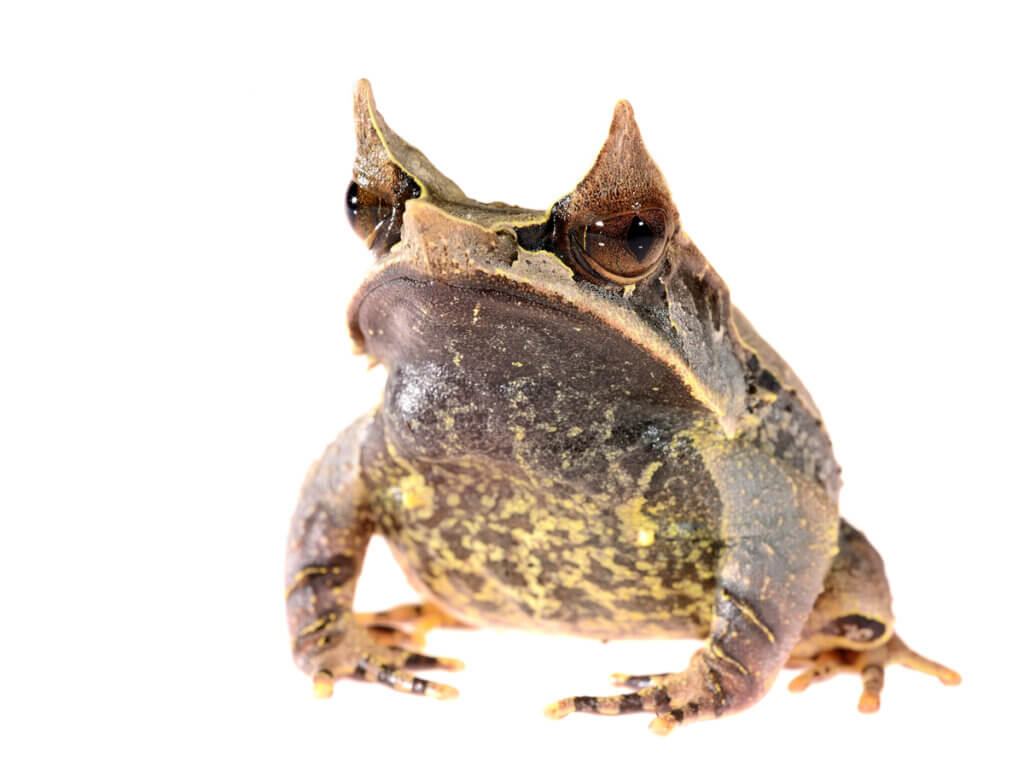 The long-nosed horned frog (Megophrys nasuta) is an amphibian species belonging to the Megophryidae family and the Anura order. It’s a stocky frog and a master of cryptic camouflage. The most characteristic feature of the species is that it manages to resemble dead leaves, both in color and in shape.

Additionally, two pairs of longitudinal ridges run along its dorsal surface and help to improve its leafy camouflage. We also know this species as the Malayan horned frog or the Malayan leaf frog.

What makes the long-nosed horned frog so special?

The long-nosed horned frog is perfectly designed to adapt to its environment. Therefore, these amphibians have gray, brown, reddish, or brown backs that become darker laterally. This cryptic coloration design makes them almost invisible on the forest floor.

What’s striking about this species is that its camouflage goes far beyond coloring. It actually embodies the physical shape and texture of fallen leaves. Its soft skin is modified to resemble the dead leaves on the ground below trees.

In addition, it has a huge angular head with supra-ciliary projections over each eye and the nasal area. Its skin folds from above the eye to the eardrum and the shoulders and toes, which are only webbed at the bases. Also contributing to its leaf-like appearance is a central fold that mimics ribbing.

Because of its leaf-like appearance, the long-nosed horned frog is virtually undetectable on the forest floor unless it moves.

The ideal niche for good camouflage

The long-nosed horned frog prefers a spacious, permanently moist, and relatively cool environment. This is just the niche it can find on the forest floors of Southeast Asia. The optimal temperature for its development is between 71.5 and 75 degrees Fahrenheit.

So, we can find this frog on the rain forest floors, usually near small streams. Its altitudinal range reaches 3280 feet above sea level.

We know that these frogs make extensive use of land and water areas in the foothills of the Himalayas and even the Indo-Australian archipelago. Therefore, this frog species is present in southern Thailand and Malaysia, Singapore, Tioman Island, Bintan, Natuna Islands, Sumatra, and Borneo.

This species, like other specialists in disguise, is quite reserved. It’s easy to understand that stillness is part of their strategy, so they stay on the leafy ground waiting for unsuspecting prey to pass by. When the insect in question appears, this predatory frog suddenly attacks.

In addition to its secretive nature, we can also talk about its call. This consists of a soft “ching” that it emits in one single note. However, the frog remains silent at the slightest disturbance.

The long-nosed horned frog is a fierce predator

It’s important to note that their strategy of going unnoticed is tremendously effective in their ecological niche. They’re predators of a wide variety of unsuspecting animals on the forest floor.

Its main diet is based on crabs and scorpions, but it also feeds on other arachnids, rodents, lizards, and other frogs in addition to these usual prey. In short, this frog will pounce on anything moving that fits in its mouth.

How does the long-nosed horned frog reproduce?

There’s little information available on the natural breeding of these frogs, however, captive breeding is quite common. The species is oviparous, with females attaching clusters of eggs to the underside of rocks and logs. The water bathes these eggs, which are partially or completely submerged.

The larvae are long, with a very large funnel-shaped mouth. They cling to the surface with their mouths, while their bodies hang vertically. This helps them in their feeding strategy, which is specialized in microorganisms on the surface of the water.

According to the International Union for Conservation of Nature (IUCN), this frog is not threatened at present. However, habitat loss and overexploitation by the exotic pet trade may reduce its population numbers.


As you’ve no doubt seen, the very strange external morphology of some animals can be truly surprising. But, if we look at their ethology, we can discover even more striking characteristics. Of course, the long-nosed horned frog is an example of this.
The Corroboree Frog: An Absolutely Fascinating Species
In this article, we're going to tell you all about the corroboree frog, an Australian species that's unfortunately critically endaged. Keep reading! Read more »
Link copied!
Interesting Articles
Amphibians
5 Poisonous Frog Species

The poison dart frog or poison frog is possibly among the most beautiful amphibians on the planet. However, their colors…