In this warlike conflict, behavior similar to that of human evil could be seen in animals. The killing of fellow beings to conquer a territory and rise to power, for example. 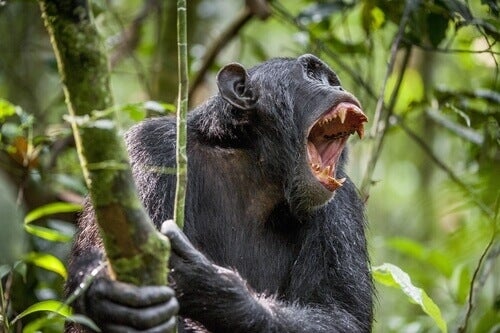 Although it may seem like science fiction, a war between animals is perfectly possible and they happen all the time. Some species that form groups and defend territories have had many a battle over the years. One of the most recorded ones was an animal war that lasted four years.

Chimpanzees: capable of the worst and the best

The protagonists of this animal war were chimpanzees, perhaps one of the best-known primates. Humans have used them in the film industry, in animal experimentation, and for acting in circuses and homes.

The famous primatologist Jane Goodall has been observing this species for more than four decades. During this time, she has seen that chimpanzees are able to use tools, mourn the death of loved ones, and understand concepts such as justice.

In addition, she has also discovered that chimpanzees were able to match the worst crimes committed by humans. Some examples are infanticide and assassinations to achieve power. Surprisingly, apes can also carry out these kinds of deeds when fighting for territory. Among their most unknown behavior, animal warfare clearly stands out.

Surely, chimpanzee behavior will remind you of the human species. Humans are also capable of high doses of altruism, but also of great cruelty.

Foreword to an animal war

It was January 1974 when this war between primates broke out and lasted four years. Jane Goodall herself baptized it as the Gombe war in some of her books, in reference to the Tanzanian national park where she studied these primates.

After more than a decade of study, Jane began to observe how the chimpanzee community she had been studying for 10 years began to divide. At the time, Mike, an alpha male chimpanzee, reigned supreme. In the twilight of Mike the chimp’s reign, something began to change, and out of the 14 adult male chimps, six began to spend time away from the group.

This new group began to occupy a territory south of the rest of the clan, and among its members were two young males known as Hugh and Charlie. Males from both groups began to avoid each other and patrol their newly divided territories, a foretaste of what was to become a war between animals later.

The beginning of an animal war

Two years passed and Jane herself went on to document how one group had split into two communities. However, she was still unaware of what was about to happen. The encounters between the two groups were starting to become tense. Vocalizations and so-called displays, a way of releasing tension without actually fighting, began to happen.

That’s when the battle broke out. An afternoon in 1974, when a patrol of primates from the southern group decided to go on a route, they encountered Godi, a male from the northern group. While hiding, the members of the southern group reached Godi and attacked him. Without a chance to defend himself, they beat him up for 10 minutes straight.

After leaving him practically immobile due to his serious wounds, one of the males nicknamed Rodolf took a large stone and ended Godi’s life with a final blow. This happened even even though he posed no threat.

The outcome of the animal war

This first killing would lead to a real civil war that would last four years. Little by little, the southern chimpanzee community nicknamed Kasakela, would kill the northern males one by one. The northern community was named Kahama. In addition, they also even kidnapped three females from the Kahama group.

This real war between animals ended wiping out all the members of the Kahama community, causing the Kasakela males to take over the former territory of this chimpanzee clan.

Undoubtedly, this is another example that these primates aren’t only similar to humans in their ability to do good. They are also similar when it comes to murdering other members of their species in order to achieve power.

Along with other behavior attributed to this species described by Jane Goodall, such as cannibalism, hunting, or the use of tools, the truth is that this war between animals that took place in Gombe is a historic event in the study of animal behavior.

What do you think about this story? It sure took us by surprise! We still hope you enjoyed learning more about these fascinating creatures and their social behavior.

The Chimpanzee: Habitat and Characteristics
The Chimpanzee is the animal that's genetically closest to the human species, but it also has a less well-known and very interesting social life.Learn more! Read more »
Link copied!
Interesting Articles
Wild Animals
The 5 Most Dangerous Animals in the World