These birds migrate during the winter season and fly in the classic V formation. 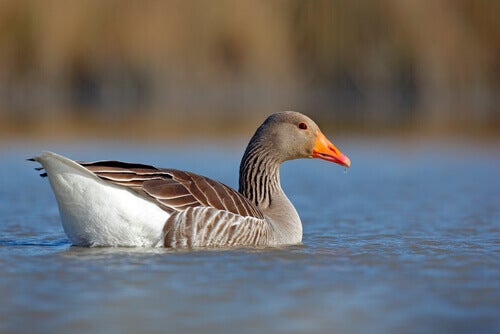 With about 50 different subspecies all over the world, all with monogamous habits and winter migrations, this family is quite large. Although domestication of geese has happened for centuries, we don’t know much about these birds. Some of the species of geese are introduced below.

Native to North Africa and Eurasia, this is the most widespread of the species of geese, having been also introduced into Australia. They’re also the largest and most robust of the Anser family: they measure about three feet and weigh about nine pounds.

The plumage of the common goose—like the one in the photo at the top of the page—is brownish gray, with the belly and breast a lighter shade than the wings.

The neck has long stripes down it, the tip of the tail is white, and both legs and its bill are orange. They feed on shoots, roots, floating plants and grasses, and nest on the ground.

2. Species of geese: the swan goose

This is another goose species that has been domesticated. Native to East Asia, during the summer they live in southern Siberia where they raise their chicks, and in the winter they migrate to Korea and northern China.

They prefer habitats near water, such as lakes, rivers and even marshes or swamps. Each year, the female lays up to eight eggs, which she incubates for a month while the male defends them near the nest.

The swan goose weighs about seven pounds. Its body is dark gray on the wings, light brown on the chest, and whitish on the neck and tail. The legs are orange and the beak is black.

This is a migratory bird native to Eurasia that migrates in summer to the Arctic regions and winters in the Middle East and southeastern Europe. It prefers tundra, areas near rivers and lakes, and even coastal regions.

The lesser white-fronted goose has dark gray fur with white lines, orange legs, a white tail, a pink beak and the characteristic white circle around its face. The female lays about five eggs per season and incubates them for 28 days. The male assists in raising the chicks until they learn to fly at two months of age.

Another goose species that can be found in Europe: they live in Iceland or Greenland in summer, and the Netherlands and Great Britain in winter. They prefer lake areas and estuaries with tall grass. They can also be seen near agricultural areas, as they feed on cereals, potatoes, carrots and beets.

The pink-footed goose has a brown belly, gray wings with white markings, pink legs and a dark head. Its short pink beak is striking. It nests on the tundra floor every July and lays six eggs. The population is increasing due to the abundance of food.

The last of the goose species on this list lives throughout the arctic regions of North America, Europe and Asia. It’s also a migratory bird that can fly many miles to avoid the winter cold.

Weighing almost seven pounds and about three and a half feet tall (males are larger than females), this goose has mainly brown plumage. It has an orange beak and legs, dark spots on its chest and wings and a black and white border around the edges of its beak.

Swans – Characteristics of a Most Graceful Animal
The swan, a most graceful animal, is often used as a symbol of beauty and eternal love. They're monogamous. That is, they mate for life. Read more »
Link copied!
Interesting Articles
Birds
Discover 5 Different Types of Owls