These are large species whose wing beats allow them to reach speeds typical of high performance cars; at this speed, they hunt their prey with maximum efficiency 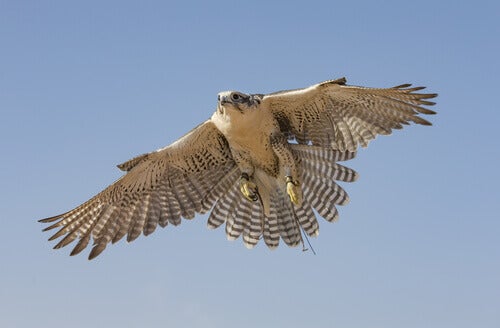 They reach great speeds and have an impressive wingspan; they attract attention for their beauty as they soar, and they hold several records in the natural world. Would you like to meet the 5 fastest-flying birds? Then read on!

Which are the fastest-flying birds?

They can fly through the clouds at an incredible speed, many dive great distances while hunting their prey and others use air currents to move from one place to another in order to avoid having to move their wings much. The birds that fly fastest are:

We begin the list here, with what is not only the fastest bird in the world, but also the fastest animal: it can reach 180 mph during a dive. The peregrine falcon—like the one in the photo at the top of this article—can be found all over the world and has almost 20 subspecies.

Females are larger than males—as is the case with most birds of prey—and that’s the only visible difference between the sexes. Both have the same plumage: bluish-black and gray wings, a white neck and a yellow beak and legs. They live in mountains and along coastlines, and can fly great distances during winter migrations.

Also known as the Caudal eagle, these birds of prey live in the northern hemisphere and are one of the fastest in the world. They can reach 170 mph while hunting their prey: mice, hares, rabbits, snakes, marmots and even foxes.

Golden eagles can have a wingspan of more than six feet and weigh about nine pounds; their plumage is dark brown with a golden head, and their shoulders and the tips of their tails are white. Interestingly, unlike other eagles, their legs are covered with feathers.

Third place on the list of fastest birds is shared by an entire family: the Apus, whose wing beats allow them to travel between 105 and 125mph. In addition, they spend most of their life in the air because they feed by catching insects with their beaks.

Two members of this large group stand out: the Royal Swift and the Mongolian Swift. Both are small in size—about 18 inches with their wings extended—and have short legs, which they hardly use except for brief rests on the ground or on inclined rocks.

These are small—no more than 14 inches—and their bodies are slender, as their wings end in a point. They have white plumage with brown on the chest, dark gray on the wings, and white and gray on the face. Their yellow legs, as well as their small beaks, attract much attention.

The Eurasian hobby lives in groves, forests, savannahs and boreal forests and uses nests already made by other birds to lay between two and four eggs per season. They have a great capacity to hunt in the air, almost always at sunset, and to eat in flight. Moreover, they can reach speeds of up to 125mph.

This is the only one of the fastest-flying birds of prey that doesn’t belong to the group of raptors; it’s classified as an aquatic bird, along with ducks and geese. Serrators are about 24 inches long and, although they spend a lot of time on the water, when they fly they can reach 80mph.

In this case of the Mergus serrator there are differences between the sexes in terms of plumage. Males have a black head and a gray and white body; females are more reddish. In both the beak is orange and the secondary feathers are white.

Discover These 5 Birds That Don’t Fly
Today, we invited you to discover 5 birds that don't fly, species have adapted to the environment in which they live. Read more »
Link copied!
Interesting Articles
Birds
The Bali Myna: A Beautiful Critically Endangered Bird