All About Ara Macaws

These exotic birds are divided into 17 subspecies, some of which are in danger of extinction due to illegal trade and the destruction of their habitat. They have a really striking plumage and come in various colors. They also have strong claws and a hook-shaped beak with a bony tongue for opening fruit and nuts. 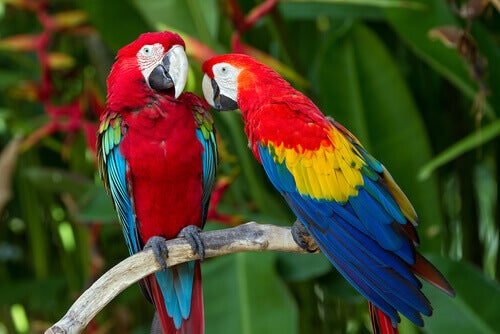 They belong to the same family as parrots and live in the rain forests of Latin America. Ara macaws are known for their brightly colored plumage and their huge curved beak. In this article, we’ll tell you everything you need to know about this fascinating bird!

These birds are adapted to live in the rainforest. Their multicolored feathers help them to blend in against the rich vegetation, and their strong claws allow them to grip firmly onto tree branches.

They also have a large hooked beak and a bony tongue which help them to hit fruit and break shells.

They’re very social and intelligent birds, gathering together in flocks of about 30. They communicate with each other in a very peculiar language and can even imitate the human voice!

Generally, they sleep in the trees during the night and then search for feed in the morning, mainly feeding on fruit, insects, nuts, or snails. Some species also eat soil or mud to relax their stomach and neutralize the components of fruits.

These birds are monogamous and will stay by their partner’s side throughout their entire adult life. They groom each other, look for food together and will mate with only their partner. When the female lays and incubates the eggs, the male hunts and brings food for the family.

In total, there are 17 species of macaws. Unfortunately, many of them are threatened or endangered because of illegal trade and the destruction of their natural habitat.

This is one of the largest of the ara macaws, normally measuring up to 3 feet tall and weighing just over two pounds. They are known for their plumage, which is mainly red with green, blue, and yellow wings and tail.

The scarlet macaw (see header image) lives in the jungles and tropical forests of Central and South America. They’re daytime birds, very social, and feed on seeds and fruits.

This is one of the best-known macaws and lives in South America, in the Amazon basin. They mix in groups of several individuals and can be recognized by their yellow and turquoise plumage. They also have dark claws and beaks and have a white face with black lines around their small eyes.

These macaws nest every two years by digging holes in tree trunks and the females lay two or three eggs, which are incubated for 28 days. The chicks leave the nest once they’re three months old.

If you’ve seen the 2011 animated movie Rio, you’ll already recognize this macaw. Their entire body is blue except for two yellow marks on their face – around the eyes and beak. Their beak and claws are black.

This beautiful bird lives in the jungles of the Amazon and is one of the largest in the ara family. As the film mentions, the Hyacinth macaw is in danger of extinction due to illegal trade.

They nest in tree holes and lay a maximum of two eggs. Only one of the chicks survives. This chick will stay with its parents until it’s three months old and finally reaches maturity at the age of seven years.

This macaw lives in Central America, specifically in humid lowland forests (maximum 4,900 ft above sea level), and is yet another species in danger of extinction.

Their plumage is very striking, with a green body, turquoise wingtips, a scarlet and red face, and a red or orange tail with light blue edges. It’s like a flying rainbow!

This macaw can fly long distances in search of food, mainly feeding on mountain almonds. They can live in flocks of up to 40 individuals and they’re monogamous birds. Once they find a mate, they will stay in the same nest for life, which is usually in a tree hole.

The female incubates the eggs for a month while the male is in charge of collecting food. Both take care of the chicks during the 60 days after hatching, after which time, the chicks will leave the nest.

9 Spots for Bird Lovers
If you love birds, don't miss this article! We'll give you the best spots for bird lovers to watch these beautiful animals. Read more »
Link copied!
Interesting Articles
Birds
Characteristics and Behavior of Geese

Interesting Articles
Invertebrates
5 Species of Crabs that Will Surprise You

An animal family that consists of over 4000 species is bound to be full of surprises. These crustaceans, known for…

Birds
Characteristics and Behavior of Geese

Animals
Types of Respiration in Animals

Different types of respiration in animals are the result of species adapting to their environments. People tend to believe that…