Characteristics and Behavior of the Eurasian Sparrowhawk

Today, we want to tell you about the characteristics and behavior of the Eurasian sparrowhawk, a small bird of prey that's in danger of extinction. 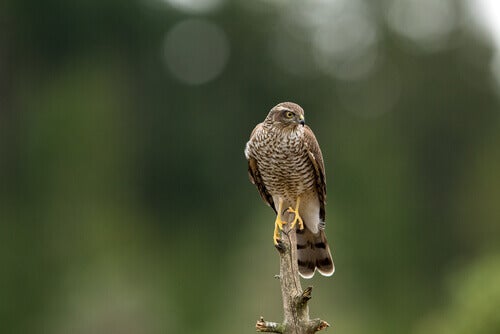 Specimens of this small bird of prey can be found from the Iberian Peninsula to Vietnam and Japan, passing through North Africa. Humans use it in falconry, although it’s considered difficult to train.

In history, some ancient cultures such as the Greeks, Egyptians, and Germans considered the sparrowhawk to be sacred. They’ve attributed certain ‘powers’ to it for its qualities and flight.

Because this animal’s at risk of extinction, we’ll now look at its characteristics and behavior in order to identify and protect it.

In its adult life, this bird has great dimorphism, that is, anatomical differences according to sex, and in this case the female is larger than the male. It reaches up to 25% more in size, with a wingspan of between 15 to 32 inches and weighs about 11 ounces.

In terms of height, the male can reach 11 inches and the female 15. Its wings are short and rounded at the edge, and its tail is slightly longer; these two characteristics allow it a fast and effective flight for hunting prey.


Its plumage is bluish-gray on top, while the back is whitish with abundant brownish stripes. This duality of colors makes it attractive to the eye.

The yellow eyes, dilated in the center, give it the attentive and penetrating look that characterizes it. If you look at one, it gives the impression that the sparrowhawk sees everything and is alert to anything that moves.

The type of feeding is favored by the shape of its small beak, which is curved at the tip to grasp and drag prey. Its strong legs and large claws allow it to grasp food and ingest it.

The sparrowhawk emits a characteristic sound in its reproductive stage. It ‘chirps’ with short, high-pitched, repetitive whistles, similar to pronouncing “ki-ki-ki-ki-ki”.

It usually inhabits dense, moist forests such as oak and pine forests, but also wooded areas near human settlements. Although this predatory bird is sedentary, those living closer to the north migrate to southern areas between September and November.

The behavior of the Eurasian sparrowhawk

As for the hunting behavior of the Eurasian sparrowhawk, its preferred prey are small birds, even their young. However, it’s capable of hunting other large birds weighing up to about a pound. Starlings, thrushes, sparrows, and blackbirds are among its options.

Depending on the availability of food, they can feed on rodents, insects, and lizards. Hunting is fast and accurate thanks to their physical characteristics – in particular, the shape of their wings and their long tail. To attack, they circle an area and soar, then descend like an arrow toward their target.

The female lays between three and six eggs between May and June, and incubation takes an average of 30 days. The hawk’s nest, built among tree branches or high up in bushes, is composed of small twigs and bark.


The male sparrowhawk takes great care in feeding the young and the mother until they’re able to fly, about 30 days after hatching. The chicks reach maturity after two or three years.

The small sparrowhawks that hatch have a grayish beak with a black tip and yellow legs. Their plumage is white with black highlights, although in a few days the head feathers change.

The current status of the sparrowhawk

Spain’s National Catalog of Threatened Species lists the sparrowhawk as an animal of “special interest”. Likewise, in the Red Book of Birds, it’s in the “vulnerable” category.

In the 20th century, the sparrowhawk fell victim to the use of organochlorine and organophosphate pesticides in Europe, which depleted the population. These fertilizers caused infertility in the species and were subsequently banned.

The sparrowhawk can also be the victim of accidents when touching man-made elements, such as barbed wires or cables. It’s also often at a disadvantage with respect to other birds that it competes with. Depending on its place of settlement, it may be affected by the scarcity of prey. Its natural predators are owls, as well as hawks, eagles, goshawks, and martens, among others.

For all these reasons, it’s necessary to protect and prohibit attacks on this bird that’s in danger of extinction.

Harris’s Hawk: The Wolves of the Air
The Harris's hawk is a medium-sized bird of prey, well known for its unique behavior and high popularity in falconry. Read more about it in this article. Read more »
Link copied!
Interesting Articles
Birds
Discover 5 Different Types of Owls