The gray parrot is a smart, friendly and sociable bird. Unfortunately, it's precisely these characteristics which make it an ideal companion that has made it an endangered species. 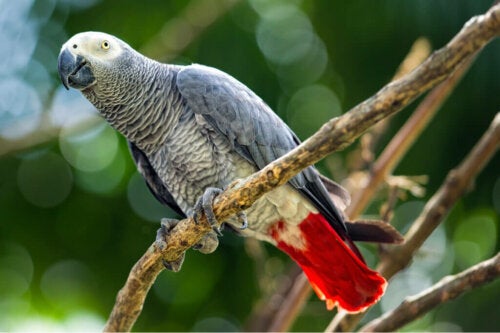 Gray parrots in the wild are in danger of extinction. According to the Red List of the International Union for Conservation of Nature (IUCN), this species is in a delicate situation due to its drastic decline in recent decades.

This is mainly because, between 1994 and 2003, more than 21% of wild specimens disappeared annually from their habitat as a result of their illegal trading on the international market. As a result, the gray parrot is nowadays in the top category of the animal protection list, and its trade is illegal.

The current situation of parrots

According to the IUCN Red List, more than 32,000 species face a significant risk of extinction. Of these, 14% are birds.

On top of this, organizations such as SEO Birdlife report that 28 % of all parrot species are critically endangered. In fact, 111 of the 389 species included in the order Psittaciformes face a series of risks causing the decline of their population.

Reports from this organization highlight that three types of parrots are particularly at risk. These are the following:

As we can see, parrots are birds of extreme intelligence and cognitive capacity, but unfortunately this doesn’t keep them safe from human activity.

The gray parrot (Psittacus erithacus) falls into the second category, as it’s a medium to large bird about 400 grams (0.9 lb) in weight and over 30 centimeters (12 in) in height.

These animals are monogamous and the egg incubation period is large and difficult, so the progeny isn’t high at all: approximately three eggs per female. In addition, it’s a slow-growing species, as gray parrots don’t reach sexual maturity until 3-5 years of age.

As we’ve already said, from 1994 to 2003, the population of this species in the wild experienced a drastic reduction. Estimations indicate that illegal traders hunted and captured more than 359,000 animals in order to sell them.

Statistically speaking, this means that 21% of wild parrots disappear annually. In addition, the mortality rate of captured animals was exorbitant: more than 60% died before reaching the international market.

For this reason, the IUCN has cataloged the gray parrot as “endangered” (EN). The combined effects of poaching, use in traditional medicine, and habitat loss, are slowly finishing off the species.

The gray parrot is the second most captured parrot for human purposes in history.

The need for immediate action

For all these reasons, in 2016, the member countries of the Convention on International Trade in Endangered Species of Wild Fauna and Flora (CITES) signed an agreement that prohibited the acquisition of gray parrots captured in the wild.

Despite all this, several newspapers point out that the illegal trade of this species didn’t stop. In their country of origin, you can still find specimens captured in the wild. One specimen can sell for the exorbitant price of $2,000.

This doesn’t mean that having a gray parrot as a pet is illegal. Its possession is theoretically possible as long as you present legal documents. These must be supported by an official body that certifies that the animal has been raised in captivity.

The legislation differs from country to country, so before acquiring an exotic animal, it’s always advisable to consult a professional regarding legal aspects.

Several experts in the field already say: “without demand there’s no supply”. It’s our obligation as pet keepers to ascertain the legal origin of each and every one of the pets. Thus we avoid occurrences like the one we have mentioned here.

The regulatory measures established worldwide for the conservation of the gray parrot are intended to stop its decline. However, as long as illegal capturing continues, we can’t ensure the survival of this species in the wild.

Tips and Curiosities
This Is What Your Cat Hates the Most