Native Doves and Pigeons of Spain

There are five species of dove and pigeon in Spain: in this article, we'll tell you how to identify each one. 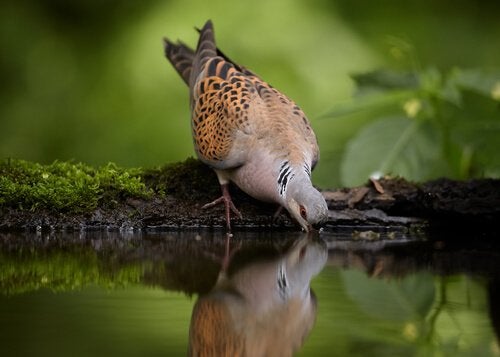 Doves and pigeons of Spain

Doves and pigeons belong to the Columbidae family. In Spain alone, you can find five different native species of Columbidae:

Of all the doves and pigeons that live in Spain, the most common is undoubtedly the rock dove (Columba livia). However, because of high levels of cross-breeding, it’s actually one of the most difficult to identify. The rock dove (or rock pigeon) is more commonly found in rocky or urban environments than woodland, which is where it gets its name.

The rock pigeon, or common pigeon, is the ancestor of the domestic pigeon. As it’s not uncommon to mix several different varieties when breeding domestic pigeons, it’s often difficult to distinguish true rock pigeons from hybrid breeds.

However, there are several key characteristics that will allow you to identify rock doves. They have two dark bars along their wings, which should be perfectly visible when it’s on the ground with its wings folded. Plus, the feathers on its back between the wings should be white in color.

The common wood pigeon (Columba palumbus) is the largest member of the columbidae native to Spain and Europe, reaching up to 17 inches in length. As the name suggests, it’s a species most commonly associated with woodland. It can be found in Europe, the Middle East and North Africa.

Thanks to its large size and the distinctive white patches on its neck, this species is relatively easy to distinguish from other types of pigeon. There are also additional patches of white feathering along its wings, which are perfectly visible when the bird is in flight.

Doves and pigeons: the stock dove

The stock dove (Columba oenas) is probably the least known dove species of all those found in Spain. It is smaller and shier than other species of the Columbidae family, and mainly lives in small colonies in forest areas on the coast.

The stock dove lives in West Asia and Morocco, as well as Europe. A third of the population lives in Britain.

The stock dove is almost entirely gray in color, with no patches of white. There is a small patch of lighter gray feathering on its back, and small black bars on the wings.

The Eurasian collared dove (Streptopelia decaocto) originates from Asia. Over the last century, it has naturally spread throughout Europe. It arrived in Spain in the 1980s and has since spread throughout the country, even reaching the Balearic and Canary Islands. In North America and Japan, they consider it to be an exotic invasive species.

Lighter in color than other doves and pigeons, the Eurasian collared dove is easy to recognize. Its feathers are pale gray in color, and has a small dark “collar” on the side of its neck.

While it generally prefers to live in more rural areas, it’s much more common in urban areas than the European turtle dove. Its ability to colonize new areas and countries is not unlike that of the cattle egret.

The European turtle dove (Streptopelia turtur) is one of the rarest of all the doves and pigeons in Spain. It is a shy bird, and tends to prefer rural areas. Unlike the rest of the Columbidea family, it is rare for it to live close to human populations.

The European turtle dove is a vulnerable species that lives in North Africa and Central Asia as well as Europe.

This is the smallest member of the dove family, not growing much more than 10 inches in length. Its wings are especially beautiful, with light brown and black feathering, which looks almost like fish scales. It also has an eye-catching “collar” on the side of its neck, made up of black and white lines. It’s one of the most beautiful of Europe’s native bird species.

So, now you know about Spain’s native dove and pigeon species. There are actually more than 300 members of the Columbidae family, but sadly very few of them are well-known.