While most hummingbirds use their beaks to preen themselves, the sword-billed hummingbird has such a long beak that it must use its feet instead. This is one of the prices to pay for their high morphological specialization. 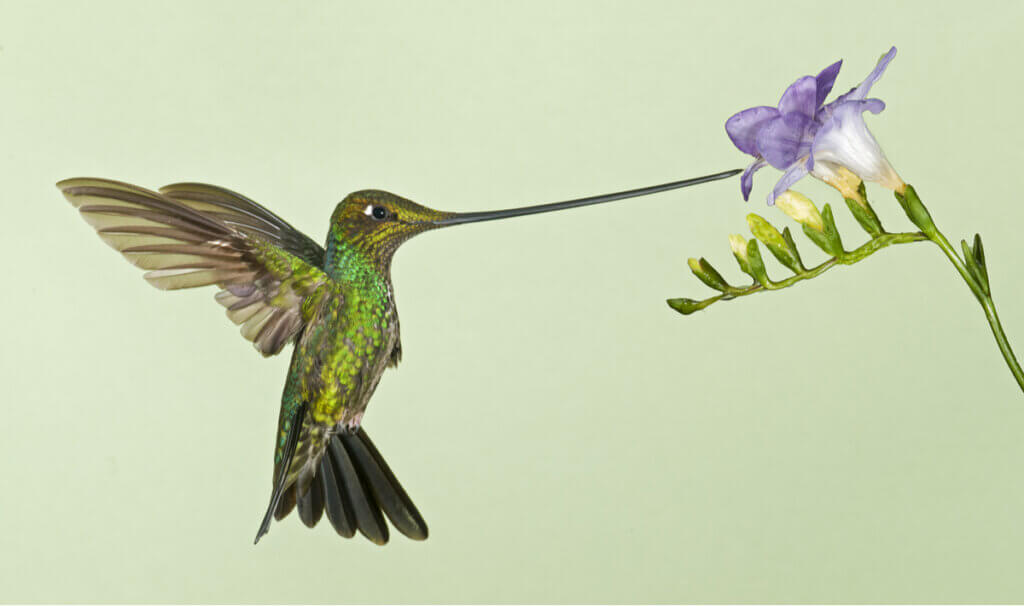 The sword-billed hummingbird (Ensifera ensifera) is one of the most amazing examples of evolution between a flower and its pollinator. Within pollination studies, the length of the insect’s tongue and the pollinating bird’s beak are generally the most important traits.

Interestingly, a classic example of this co-evolution is Darwin’s orchid (Angraecum sesquipedale). In 1862, Darwin described this beautiful flower in one of his studies. The most significant detail of the orchid is its long spur, which can be between 8 and 13 inches long.

Darwin predicted the existence of a sphingid butterfly with a proboscis that could release nectar at the bottom of the spur. Forty years later, the sphinx with the appropriate size tongue (Xanthopan morganii praedicta) was found in Madagascar. In this article, we’ll be talking about the case of the sword-billed hummingbird and its flower.

The sword-billed hummingbird is one of the largest species of hummingbirds. One of its most remarkable features is its unusually long beak, approximately 4 inches long. In fact, it’s the only bird that has a beak that’s longer than the rest of its body (excluding its tail). In addition, its tongue is also very long.

The sword-billed hummingbird (Ensifera ensifera), has a marked sexual dimorphism. Males have bronze-colored heads, bronze-green backs, and bright green bellies. In addition, their throat is blackish green and the tail is bronze-green in color.

On the other hand, although females have a similar colored head and back, they have a white belly mottled with green. Moreover, females have a more olive-colored throat and grayish-white edges around the tail.

This exotic bird inhabits cloud forests in the mountains from western Venezuela through Colombia, Ecuador, Peru to northeastern Bolivia. It also lives at elevations higher than 5,500 ft and up to 10,800 ft above sea level.

This bird is a year-round Andean resident, with no known migration routes. In addition, the species is considered to have stable population numbers and dominates a wide geographic range. However, it’s unevenly distributed and difficult to find, making the species complex to investigate.

This hummingbird is a highly specialized species. This means that it feeds on the nectar from very specific flowers. Because of its unusually long beak, it can feed on flowers with long corollas, especially in the Passiflora and Datura family.

We should note that the mixed Passiflora species is totally dependent on the sword-billed hummingbird for pollination. In addition, small insects and spiders are also an important part of their diet. Males watch over their feeding areas and are particularly aggressive towards other hummingbirds or any other nectar-producing species: butterflies, bumblebees, etc.

The hummingbird usually drinks the nectar while in flight. It also visits the same flowers in the same sequence. As a result, this behavior helps effective flower pollination and the crossing of species.

Birds of this species are polygamous, as this behavior promotes increased reproductive success. In general, we know very little about the number of offspring and their survival rate. However, we do know that females generally lay their eggs between February and March. In addition, only the female stays to feed and protect the nest.

The evolution of the sword-billed hummingbird and the passionflower plant

Several studies have established that this bird and the mixed Passiflora plant went through a special joint evolution process. In the bird’s case, they developed an amazing beak. On the other hand, the plant developed the position of the anthers and sigmas plus the length of the corolla tube, which made it an inaccessible food source for almost all species, except this hummingbird.

The symbiotic relationship between them allows the passionflower to depend on the bird for pollination, while the bird gets a high-quality food source.

Asymmetry in a high specialization

It’s interesting to know that in most of the studies regarding specialization in extreme pollination the interaction between the plant and the pollinator is asymmetric. This means that while pollinators interact with several plants, the plant often depends on only a few pollinators. This is beneficial for both, even if it doesn’t look like it.

On the other hand, in the case of Darwin’s orchid and its pollinating butterfly, Darwin estimated the ratio to be about 1:1. Also, the scientist predicted that the extinction of one partner in this relationship would lead to the extinction of the other.

Thus, any damaging effects that may affect the flower and plant-pollinator interactions would first be visible in special relationships such as this one.

If the relationships between plant and pollinator are asymmetric, pollinators could be more protected from extinction by feeding from various nectars.

The sword-billed hummingbird is considered a species of “minor concern” by the International Union for Conservation of Nature. There are no signs of population decline or visible threats to the species. However, there are also no global population numbers yet.

Various factors, such as climate change and deforestation, threaten the population of this special hummingbird. Mainly those factors leading to habitat loss and decreased food sources, especially the Passiflora plants.

The Fascinating Life of a Hummingbird
In this article, we'll tell you about the fascinating life of a hummingbird, a very nice little bird. Its wings move so fast, you can't see them. Read more »
Link copied!
Interesting Articles
Birds
Gray Parrots: An Endangered Species