The 7 Most Beautiful Birds of Central America

These birds stand out for their varied range of striking colors. They are wild birds that inhabit numerous parks and nature reserves. 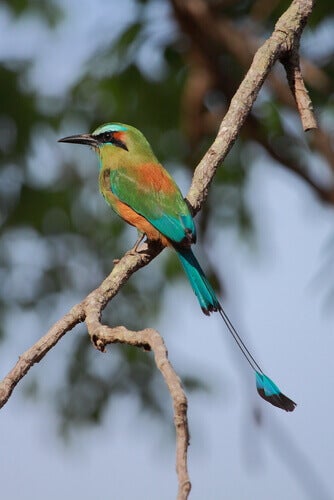 Without a doubt, one of the most impressive places to admire wildlife in the wild is the Caribbean. In this article, we’ll tell you about the most beautiful birds of Central America. Whether you want to travel there, dedicate yourself to ornithology, or just learn, let’s take a closer look!

The most beautiful birds of Central America

With dozens of natural parks, nature reserves, jungles, forests, beaches, and so much nature in a small territory, birds of Central America are very colorful and striking. Among them, we want to point out:

Also known as the Turquoise-browned motmot, these are beautiful birds that can be found from the Yucatan peninsula (Mexico) to Costa Rica. They live in jungles, forests, and woodlands. People know them for their polychromatic feathers.

The Torogoz – featured in the image at the beginning of this article – have green bodies, reddish bellies, and light blue, white, yellow, or orange wings. In addition, they have blue flight feathers and tails. These flight feathers are long feathers that stand out from their tails.

Also known as the scarlet macaw, this is one of the most striking birds from Central America. This is primarily due to their three feather colors: red, yellow, and greenish-blue. They are the largest species in the Ara family. Macaws live everywhere from southern Mexico to central Bolivia. They prefer humid, tropical forests, jungles, and low altitudes.

Also known as the clay-colored thrush, this bird has a broad territory as its habitat. They live from South Texas to Colombia. They’re famous for their song, which features a wide variety of tones. Yiguirros are also very small – less than 11 inches. In addition, they have brown striped feathers on their throats.

These birds belong to the momotid family. They are medium in size and inhabit the densest forests on the continent. These birds also have colorful feathers. They have green bodies, orange stomachs, and blue faces and tails. In addition, they have two long tail feathers.

Guardabarrancos feed on insects, lizards, and fruits. They silently perch on branches for a long time before launching themselves onto their prey. Females lay four eggs and incubate them for 20 days with their partners. Then, one month after hatching, the chicks leave the nest.

Similar to hummingbirds, this bird is endemic to Costa Rica. They mainly live south of the Reventazón River and in the Tilarán and Guanacaste mountain ranges. They only weigh three grams. Also, their beaks allow them to eat flower nectar and certain invertebrates.

Within the family of eagles, the harpy eagle inhabits neotropical areas, such as the rain forests of Central America. In fact, these are the largest eagles in the Western and Southern hemispheres.

Their feathers are similar in both sexes. For example, their feathers are made of three shades of gray on their heads, bodies, and legs. Their beaks are 6 inches long. They also have strong claws and a double crest on their heads. These are not just their most notable characteristics, but also what makes prey fear the harpy eagle.

This animal is included in many local legends and myths. In fact, they also lend their name to the national currency. Quetzals are associated with a Mayan deity. People have revered their green tail feathers since ancient times.

In terms of their characteristics, they’re medium-sized birds. They’re about 15 inches long and weigh about half a pound. However, the males’ tails measure up to 25 inches.

Their feathers are green with golden, blue, and violet colors. They also have deep red bellies. On the other hand, females have more muted tones and black beaks (males are yellow).

The Amazing World of Birds of Prey
Birds of prey are essential for the survival of the world because they're a natural pestiside. They come in all shapes and sizes, some are even nocturnal. Read more »
Link copied!
Interesting Articles
Birds
Characteristics of the Trumpeter Swan