The blue jay is a relative of the crow and is unique to North America. Discover more about this beautiful bird in today's article. 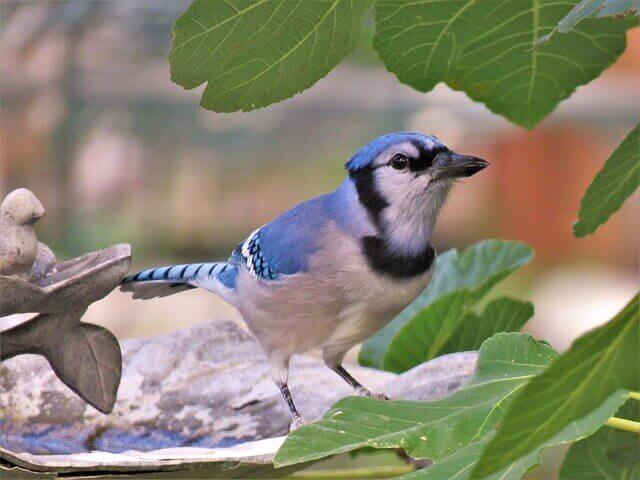 The blue jay is native to North America and is distributed throughout most of central and eastern United States.

On the other side of the same famous mountain chain, we find another well-known jay species: the Stellar’s jay. Therefore, no matter what side of the country you’re on, it’s common to find jays hanging around the yards and gardens of the United States.

Given the beautiful blue color of their feathers, people don’t usually associate them with birds like the crow. However, blue jays and crows are actually related. Blue jays belong to the Corvidae family, the same family that crows and magpies belong to.

Feathers and other physical features of the blue jay

The blue jay (Cyanocitta cristata) is a bird that measures some 9 to 12 inches in length. Its most recognizable feature, as its name indicates, is the beautiful blue coloring of its feathers. It also has black white and black spots on its wings and tail. Part of the bird’s face as well as its entire belly are white, and it has a black collar around its neck and the sides of its head.

That said, the color of the blue jay’s feathers isn’t technically blue, but brown. Blue jays don’t possess any blue pigment, but we perceive the color blue as the result of a scientific phenomenon known as light scattering, which has to do with the refraction of light on the bird’s feathers.

At the same time, this bird’s song is very loud and shrill, like that of a seagull. The blue jay also produces a series of musical sounds and can imitate the call of other birds, including the falcon.

A very social bird, but one to be reckoned with

Blue jays are fairly social birds. Some interesting characteristics of these birds’ behavior are:

These birds have a reputation for being aggressive towards other birds. Competitions between fellow blue jays have been observed in which they ended up attacking their eggs and destroying–or stealing–one another’s nests.

A sign that indicates that the animal is nervous and that it may soon become aggressive is the emission of a very sharp chirp, accompanied by the feathers on its crest standing up.

The blue jay is an omnivore

The blue jay is an omnivore, however, its nutrition comes mostly from plants. Given the strength of its beak, it can feed on acorns that it gathers and stores in holes in the ground.

Blue jays can also feed on insects, such as caterpillars, beetles, and grasshoppers. On some occasions, they may eat spiders, snails, bird’s eggs, small rodents, frogs, baby birds, and even carrion.

The bird that performs funerals?

Many animal species carry out certain funeral rituals after the death of a member of their family group. Giraffes and elephants seem to mourn the loss of their family members, and the same is true for the blue jay.

When blue jays find one of their own dead, they call the entire group and gather around the body. Scientists explain this phenomenon as a behavior they may have developed in order to warn of danger nearby.

Without witnessing how the death occurred, blue jays recognize the death of their family member. They identify this information as something they should share with the rest of the group the same way they would in the presence of some predator in the area.

With this strategy, they manage to reduce their exposure to the possible danger the provoked the bird’s death. At the same time, they work jointly against the predator to scare it away.

The blue jay is an intelligent bird that, despite its beautiful appearance, isn’t as “sweet” as it may seem. As we mentioned, if a blue jay needs to defend itself, it will do so without hesitation. If you see a blue jay in its natural habitat, you should keep in mind that this species doesn’t behave as mildly as a common sparrow.

The Yellow Cardinal: A Sweet and Melodious Singer
Every problem the Yellow Cardinal has stems from his beautiful singing and eye-catching color. However, it's illegal to own a specimen, even today. Read more »
Link copied!
Interesting Articles
Birds
Discover 5 Different Types of Owls