The Coconut Lorikeet: The Bird that Looks Like a Toy

The brightly colored coconut lorikeet belongs to the parrot family and lives in Oceania and Southeast Asia. These birds live in pairs and, as a distinguishing feature, possess a very long tongue that allows them to eat pollen from coconut and eucalyptus trees. 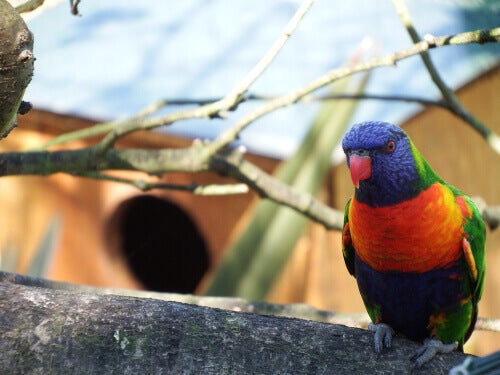 The coconut lorikeet (Trichoglossus haematodus) belongs to the parrot family and lives in Southeast Asia and Australia. It’s small and has very particular characteristics.

When we talk about lorikeets, we’re referring to a tribe of birds within the parrot family that live in Oceania and part of Asia. They’re small parrots that have a unique and singular characteristic. Unlike most psittaciformes, the lorikeet’s tongue has the shape of a brush, and allows them to feed on pollen and nectar.

There are dozens of species of lorikeets, each with a different color combination that makes these birds so beautiful. Among all of them, without a doubt, the most outstanding species is the coconut lorikeet.

Characteristics of the coconut lorikeet

The coconut lorikeet is a small parrot, which together with its tail is about 10 to 12 inches long and weighs about 4.5 ounces. Its plumage is very distinctive: It has a blue head, with a yellowish neck, and a green back with splashes of red. Much of its body, mainly tail, wings and part of its back, is green.

Its beak is almost black in young animals, and it turns to reddish tones with age. It also has red and black eyes. Given its unique coloring, both in its beak and plumage, it’s easy to distinguish the coconut lorikeet from other lorikeets.

There isn’t any sexual dimorphism among these birds, meaning it’s impossible to distinguish males from females. Therefore, the only real way to determine the sex of a coconut parakeet is through DNA tests, which involve using the feathers or blood.

The only other way to differentiate these parrots without this test is through their behavior. And this, of course, requires knowing quite a bit about the species, since males display threatening behavior.

The behavior of coconut lorikeets

The coconut lorikeet usually travels in pairs, although it’s not uncommon for them to come together in groups during certain periods. They’re territorial birds and defend their foraging and nesting areas from other birds.

They feed mainly on fruit, pollen and nectar, thanks to their tongue with specialized taste buds and extreme length, which allow them to consume the pollen of more than 5,000 species of flowers. In their natural habitat, their main food sources are coconut and eucalyptus trees.

They’re quite trusting and friendly birds, and, in Australia, they usually interact with humans to get food. They’re also very active birds with strong legs. In fact, they often hang from the branches of trees like trapeze artists to reach the flowers.

In Australia, young are normally born during the spring, although it depends on the weather and environmental conditions. Normally they lay from one to three eggs, which the mother incubates for just under a month. Like many other parrots, these birds are an example of monogamy in the animal kingdom, and remain with their partner throughout their lives.

The habitat of the coconut lorikeet

These birds live in subtropical areas, normally in jungles and forests, given their dependence on trees. They normally use holes in tall trees such as eucalyptus, although in areas without predators they have no problem making holes in the ground.

The species is quite common. In fact, it’s the most observed bird in Australia and isn’t at risk or endangered. However, there are some subspecies whose populations are declining due to habitat loss and illegal trafficking.

As already mentioned, they live in Oceania and Southeast Asia, although humans have introduced them to areas where they didn’t live naturally, such as Tasmania, New Zealand or even the city of Hong Kong.

In these areas, it’s considered an invasive species, threatening the native fauna, especially honeybirds, which compete with lorikeets for the same source of food.

The Diet and Habitat of the Bourke’s Parakeet
Bourke's Parakeet is a small bird known for it's sweet and gentle disposition. What's more, they can live to reach 25 years of age. Read more »
Link copied!
Interesting Articles
Birds
Lesser Kestrel, the Smallest of the Falcons