The European Robin: A Bird with Charisma

Quite accustomed to human presence, the European Robin is one of the birds that approaches people the most. It's closely related to popular culture, associated with the god Thor in Scandinavian countries, and with Christmas in Great Britain. 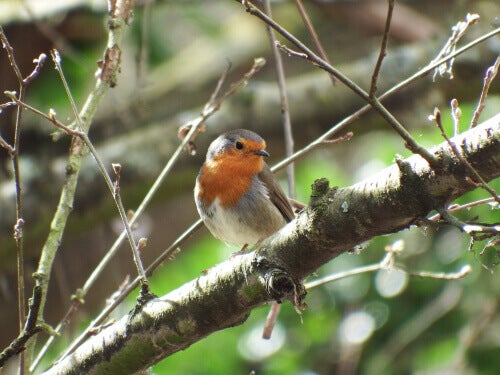 The European robin (Erithacus rubecula) is a very common passerine throughout Europe. What’s more, it’s one of the most charismatic birds on this continent, thanks to its curious and sociable behavior.

Adults weigh barely 0.7 ounces and have a wingspan of 9 inches, but they’re unmistakable. Both sexes have an orange breast and face, while the rest of the plumage is gray with some brownish tones. As for young birds, they lack these fiery hues.

Although very widespread, they hardly vary in their different areas of distribution. We can only observe changes in their behavior, as, in some regions, they’re migratory birds. They live throughout Europe, North Africa, and northwest Asia. They don’t appear in countries such as Iceland, but they do appear in the British Isles.

Unfortunately, this bird is also suffering the consequences of climate change and is no longer wintering in Spain. This is because populations in eastern Europe are no longer as cold during the winter season.

Although this species has been released in numerous places where it didn’t originally live, it hasn’t colonized countries such as Australia or the United States. The Canary Islands variety separated from the rest millions of years ago and has a white eye halo that sets it apart.

Its behavior: The secret of the robin’s charisma

Undoubtedly, their behavior is one of the most striking things. These diurnal birds feed on invertebrates, berries, and fruits. However, when we see them depends on the time of year. In winter, they receive the help of bird feeders, as it’s surely one of the favorite birds for people to spot in their yard.


In general, it’s very accustomed to being around humans, or perhaps it’s particularly curious. When walking through the forest, it’s not uncommon for the robin to come out of the trees at the edge of the path to look at us closely.

If we approach it, it’ll take a while to leave, and then emit its warning voice, characterized by two dry metallic beeps. On the other hand, its melodic song is reminiscent of other birds such as the nightingale.

Interesting facts about the European robin

In Great Britain, they’re particularly trusting, as gardeners have long considered them their friends because they approach in search of worms when turning the soil. This behavior, which they also perform with animals such as wild boar, has endeared them to British horticulturists.

Males are quite territorial and will attack other birds during the breeding season, especially other male robins. In fact, attacks are one of the main causes of mortality in this species. Experts even claim that 1 in 10 deaths is due to territorial fights.

The abundance of this bird has allowed multiple studies on it, in particular on its magnetoreception. The robin can detect the earth’s magnetic field thanks to the light that enters through its eye. This is a physical mechanism that’s still under study and seems to have to do with quantum entanglement.

The European robin in culture

The regular appearance of these birds has also helped it to feature in numerous samples of folklore. It’s considered the bird of the god Thor in Norse mythology, which relates it to thunder and storms.

It’s also been associated with Christmas and numerous British legends. For example, legend has it that its red breast is due to the fact that it was stained with blood when comforting Jesus Christ on the cross. Or even that its breast burned when it tried to fetch water for lost souls.

British letter carriers wore red during the Victorian era, which is why they received the nickname of robins. The linking of this job with Christmas has to do with this bird being part of the British winter festivities.

Again, this is another bird that influences the popular culture of various countries and demonstrates the important relationship we have had with these birds.

The Crow in Popular Culture and Mythology
The large crow is an iconic species of corvids, a group of highly intelligent birds. Continue reading, today's article is about the crow in popular culture. Read more »
Link copied!
Interesting Articles
Birds
Discover 5 Different Types of Owls