The Five Most Colorful Birds Out There 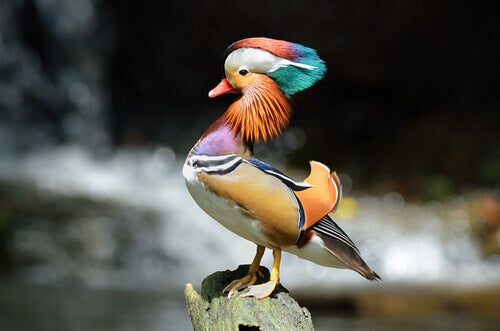 No one can deny this is one of the most colorful families of birds in the world. It’s quite a sight to watch them in full flight spreading their striking wings. You probably already know that most of these colorful birds live in tropical regions, surrounded by all sorts of vegetation. Read more about them in this article.

What are the most colorful birds?

Unlike humans, who must wear colorful clothes to attract attention, animals are noticeable due to their fur, scales, and feathers. Are you ready to find out what are the most colorful birds in the world? Here you go.

This brightly colored duck is native to China, Siberia, and Japan, although people brought it to Europe and now they inhabit several urban parks. The male is the most colorful one, as usual, and their colors are mainly brown with various patterns. Also, their face has two white stripes and a reddish beak. In contrast, the female is grayish with white and brown spots.

These animals may form small groups in winter, but it’s quite rare for them to associate with other ducks. They mainly feed on plants and seeds both in the water and on land, and nest in trees near a lake or river.

You can guess what the feathers of this bird are like just by hearing their name… Indeed, they’re rather colorful! Their head and belly are blue, the chest, legs, beak, and eyes are orange, and the rest of the feathers are green. The rainbow parrot lives in rainforests, woodlands, and coastal scrublands of Southeast Asia and Oceania, and there are about 25 known subspecies.

These birds are about 12 inches long, are frugivorous, and supplement their diet with seeds and insects. In addition, their nests are in tree hollows where they lay two eggs per litter and incubate them for about a month.

This is one of the most colorful and well-known birds in Central America, so much so that Guatemala’s currency is named after it. The Mayans attributed them a divine nature.

Their body is mostly green, except for the breast and belly which are red. Moreover, the beak is yellow and the tail contains white and bluish feathers. In addition, males have a bristly crest on the head and both sexes have small dark legs.

Of course, this is one of the most colorful birds in the world and belongs on this list. Furthermore, the males of the entire pheasant family are full of color and the females are brown to gray. The one representing today’s article is a golden pheasant.

This species is native to Burma and China and has a golden yellow-crested head, an orange-black neck, a red belly and chest, and a green-yellow-blue back. In addition, their legs and beak are yellow and the long tail gray-brown with white stripes. It’s thicker at the origin and pointy at the end.

5. Macaws are some of the most colorful birds

Finally, the Scarlet macaw is another one of the most colorful birds that inhabit Central and South America. Additionally, there are no differences between sexes as both are predominantly red, with blue-green-yellow wings. Their face is usually black and white.

Finally, macaws are extremely social and form flocks of several dozen monogamous pairs. Moreover, most of their activities are diurnal. In addition, they mainly feed on seeds, communicate with squeaks and look for the best places to rest among the trees in the evenings.