The Swallow: The Most Common Migratory Bird

The swallow, the most common migratory bird, is a very adaptable species. It's perfectable capable of living in urban areas, but prefers agricultural regions and being near rivers. These birds travel in groups in order to protect themselves from predators. 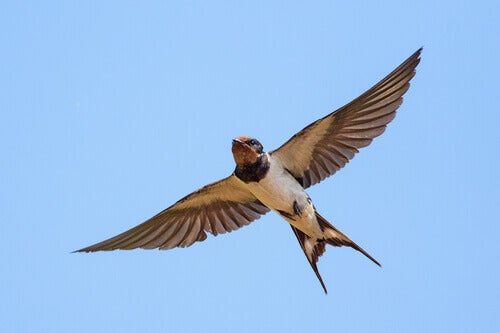 Swallows are those birds that perch on our balconies and fences and make their nest on our houses. You can see them all over the city, though they prefer a country setting. They are the most common migratory bird and, in rare cases, are kept as pets. Today, we want to provide some key information about the swallow in order for you to learn more about the species.

While it’s not common for people to have swallows as pets, scientists have studied them quite a bit to discover their reproductive secrets. In addition, their research has revealed information about their migratory processes.

What you should know about the most common migratory bird¿

Characteristics of the swallow

Swallows measure between 6 and 8 inches long and have a wingspan of up to approximately 14 inches. They weigh between 0.5 and 0.9 ounces, – they really are very small animals!

As for their color, their feathers have a metallic blue tone that’s nearly black and shines from a distance. The typical red coloring of their chin and the even blue tone of its head are truly eye-catching. There’s very little sexual dimorphism among this species, meaning that males and females look alike. The only difference is that the females’ feathers are slightly shorter and their abdomen is a shade lighter.

The habitat of the swallow

Swallows have a great ability to adapt to their surroundings, which we can see in the way they’ve managed to coexist with humans. They receive certain benefits from this coexistence and aren’t a nuisance to humans.

Just the same, these birds are not particularly fond of vast areas of vegetation. Rather, they prefer open fields, agricultural terrain, and the land around lakes and rivers. It’s uncommon to see them on steep or rocky terrain or in very urbanized studies. This all seems to indicate that swallows don’t like clustering and crowding, be it natural or artificial.

As we mentioned, swallows are the most common migratory birds. They live in Europe, Africa, the Middle East, and South America. In fact, there’s also evidence that points to the existence of some specimens in New Guinea.

The migration of the swallow

Swallows don’t like to be alone, which is why they migrate in groups–whether large or small. This is a way to protect themselves from predators and make sure they have companionship once they reach their destination.

Swallows start migrating in September and continue for about two months. Experts estimate that swallows can fly some 44,000 miles per year. Their song is the greatest signal that they’ve returned to their winter homes. Which brings us to our next topic…

“I slept in an old homestead by the sea:
And in their chimney nest,
At night the swallows told home-lore to me,
As to a friendly guest.”

The song of the swallow

The song of the swallow is one of the sweetest bird calls there is. In fact, more than a few poems make mention of their tune. It’s a mix of chatter and harmonious chords and a sudden stop that marks the end of a beautiful performance.

The behavior of the swallow

While we’ve already talked quite a bit about this bird’s behavior, we want to take a closer look at its way of life.

For example, what does their courtship look like? Well, these birds have a partner for life. However, it’s interesting to note that males must earn the respect of their mates throughout the entire relationship. They must maintain the right weight, provide food for their families, and possess bright and intensely colored feathers. If not, they may suffer from infidelity.

Females can lay no more than 6 eggs at a time, and not all of them survive. Therefore, feeding their young isn’t an issue, especially since they have special abilities to hunt many works and insects at once. In fact, experts believe that a nest of baby swallows will require over 2.2 pounds of worms and insects each day. Three weeks after being born, young leave their nest and begin learning to fly.

Now, the next time you see a sparrow, you’ll know so much more about this sweet and endearing species.

The legend of the swallows and the thorns of Christ
According to popular belief, a group of swallows began to remove Jesus's thorns after he was crucified and alleviated his suffering. Hence they are considered to be sacred animals. Read more »
Link copied!
Interesting Articles
Birds
Baby Swifts May Need Your Help

Birds
The Diet of the Domestic Turkey

Turkeys are animals that we've all grown up with in one way or another. More than likely, you saw one…