These toothless animals, either due to evolution or because they never had teeth, are able to feed using their beaks, tongues, or big snouts. The digestive system is also key in these cases, as these animals have a harder time grinding food. 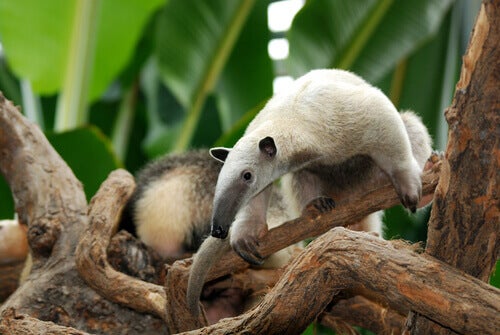 Most species in the animal kingdom have teeth or similar structures that allow them to grind or capture food with their mouths. However, there are some toothless animals that also eat, but in another way. In this article, we’ll tell you what they are.

The toothless animals that exist

Toothless animals feed using other “techniques”, either with a beak, a tongue, or a big snout. Some of the most notable examples are:

This species of the suborder Vermilingua, meaning “worm tongue”, are mammals native to South America. They have a long snout and a sticky tongue that allows them to feed on ants, and termites to a lesser extent.

Anteaters, featured in the main image of this article, don’t have teeth. But that doesn’t prevent them from feeding! They sniff out trees and mounds of earth first, then dig with their strong claws, and, lastly, stick their snout into an anthill.

It quickly sticks out its tongue and the ants stick to it. Then, the animal swallows them whole and alive. It must do so quickly in order to avoid painful stings.

This is another toothless animal that’s famous for inhabiting gardens. However, many people don’t know that, to feed itself, its mouth turns into a big vacuum cleaner that sucks up organic debris from the earth.

An interesting fact is that a worm can eat up to 90% of its body weight a day. How much more would it eat if it had teeth? Its effectiveness and voracity are due to its digestive system, which consists of a sucking mouth, a pharynx, a food storage maw, a shredder bag or gizzard, and a big bowel.

Although no bird species have teeth, we decided to highlight the pelican due to its ability to swallow big fish whole. Its long beak and gular skin, which hangs from the lower mandible of the beak, allows it to catch prey and then drain the water.

This sea bird also feeds on amphibians, turtles, and crustaceans. To do so, it uses the same technique as for fish: it opens its beak, collects a good amount of water as if it were a container, and then “strains” it until it traps its prey. Then, it throws its prey into the air and swallows it headfirst. It’s quite a sight to see!

This case is quite interesting since, in the past, turtles did have teeth. Nature took that element away from them, meaning they had to get used to grinding food with their “beak” or swallowing prey whole.

Terrestrial turtles can feed on plants, leaves, fruits, earthworms, worms, or snails. For their part, aquatic turtles feed on mollusks, algae, and coral.

This is another animal that belongs to the group of toothless animals. It’s a bird that not only attracts attention due to its colorful feathers but also for its ability to eat a lot of fruits and seeds, even though it doesn’t have teeth.

Macaws have powerful beaks with sharp hooks at the tips that are slightly less pronounced than in birds of prey, which allows them to feed. If seeds or fruit, such as palm nuts, are very big, they first break them against a branch or stone.

We hope you enjoyed learning about these five toothless animals!

Caring for Your Cat’s Teeth: How and Why
The cat's teeth share many similarities with human teeth. For this reason, caring for your cat's teeth is so important. Find out more. Read more »
Link copied!
Interesting Articles
Birds
The Bali Myna: A Beautiful Critically Endangered Bird