In addition to the different types of fins, the number of fins can vary according to the species, gender or behavior of the fish in question. 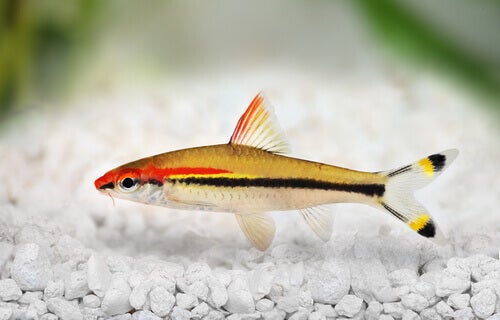 In order to be able to move and keep their balance in water, fish really need their fins. Of course, they’re not all the same. It all depends on the species and its particular habits. We’ll speak about the different types of fish fins in these aquatic animals.

What do different types of fish fins look like?

Depending on its way of life, the group to which it belongs or the shape of its body, a fish can have different types of fins. They’re all supported by cartilaginous or bony spines or rays, and can be hard, soft, and even branched.

Not all fish have the same number of fins, as everything depends on their evolution, size, movements, etc. In some species, they even help differentiate the sexes. There are paired and unpaired fins, depending on whether they appear twice or once, respectively.

This means that they’ve developed on both sides of the body and are of the same size. In this group, we can highlight pectoral fins and pelvic or ventral fins. The latter can be found on the abdomen, on the jugular, on the thorax, or on the middle part of the body.

In the case of the pectorals, they’re not present in all fish and are used as sensory organs. They’re located near the operculum, and, in some species, they’ve developed as a type of “legs” that allow them to walk on the seabed.

Pectoral fins work as oars in the case of bony species with little weight in water, as “hydrofoils” to avoid sinking in large species, and as a way to keep close to the surface to be able to feed.

In addition, pelvic fins are responsible for providing stability during swimming. These fins also prevent upward or downward swaying by receiving the oscillations of the water. In some cases, they have the ability to attach to certain objects such as rocks or corals, thanks to a very powerful suction disc.

This is another unpaired fin which can have different shapes. Mainly, there are four types of caudal fins: symmetrical (homocercal), asymmetrical (heterocercal), diphycercal and protocercal. In addition, the homocercal can be truncated, rounded or forked.

We can say that the caudal fin is the most “famous” in fish, as, in many cases, it’s the most visible and even the most mobile. This fin allows fish to propel themselves, as if it were the rudder of a ship. For example, in sharks it moves sideways.

Finally, this type of fin isn’t very common, but it’s worth mentioning. It’s of fleshy consistency, of variable size and located between the caudal and dorsal fins. It’s present in teleost fishes, fishes belonging to the order Salmoniformes (salmon), fishes in the order Siluriformes (catfishes) and in the order Characiformes (piranhas), among others.