Learn All About Fish With Lungs: Lungfish!

These fish with lungs stand out for several reasons, although the most outstanding one is that they metamorphose like amphibians. Learn all about lungfish. 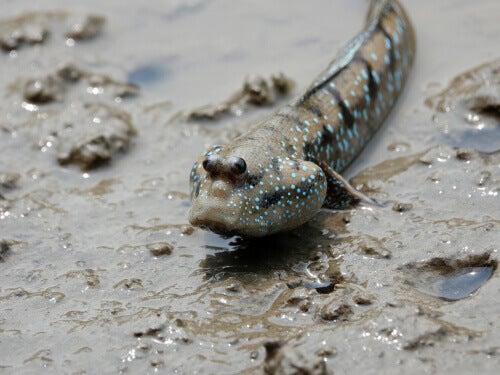 Believe it or not, lungfish do exist and, as their name suggests, they’re fish with lungs! Although they’re not like our lungs, they differ from the rest of their marine family and are worth learning about. We’ll provide you with more information in this article.

What you should know about lungfish

Among the sarcopterygian fish -with fleshy fins- we can find a subclass which we know popularly as lungfish. However, its scientific name is dipnoans. Their main characteristic is that they have functional lungs, derived from the pharynx.

In addition, they have nostrils open to the outside which, although we may think that they allow them to breathe air, the truth is that they serve as olfactory sensors. How do fish with lungs capture oxygen? The answer is: through their mouths. Then they swallow it like amphibians, and that’s how it reaches the lungs.

Another curious fact is that the larvae of these species have temporary external gills. And, thanks to the metamorphosis process, they disappear to give way to the lungs that they’ll use in adulthood.

Their coloration is variable (from deep blue to brown) and they have an elongated body like that of eels. Also, they’re covered with scales and have a symmetrical and pointed tail. In some cases, they can be 5 feet long.

As for their reproduction, they’re ovoviviparous; females fertilize their eggs in the belly before expelling them. Mating takes place in spring or summer. The male digs a nest in the mud and takes care of the young that his “partner” previously laid in the ‘nest’. The father also has the task of protecting the larvae.

Experts believe that this group of fish – known as living fossils – used to roam the land in ancient times. Then, according to them, some evolved and formed gills to be able to breathe underwater. They’ve reached this conclusion by analyzing their lobe fins, which are the ‘missing link‘ in the transformation of marine species.

Lungfish are divided into three genera: Protopterus (from Africa), Lepidosiren (from South America), and Neoceratodus (from Australia). The first has four species and the other two have only one species each.

Protopterus are very similar to each other, except for their size and body color. They swim like eels – with oscillating movements – and their eyes are bluish and small. The scales are small and cover the entire torso, belly, and fins.

They have a single lung made up of very thin walls and numerous blood vessels so that blood can flow faster. In addition, their heart has adapted so that it doesn’t need as much oxygen.

Lepidorisen are the only survivors from South America and are known as ‘mudfish’ because they spend a lot of time in the mud. When they’re young, they have golden bodies with dark bellies and, as they grow, they turn brown or gray. They can measure up to 50 inches, have small scales, and their lungs grow from the seventh week of life. Before that, they have gills.

Finally, the Neoceratodus is endemic to Australian freshwaters. They have only one lung and large scales that cover them completely. The oldest fossil specimens found of this species are apparently 135 million years old.

They have the most developed gills of the whole family and use their lungs in case the water quality is poor or they’ve been submerged for a long time.

Mexican Tetra Fish Repair Their Own Heart Tissue
Nature is full of fascinating processes hard to believe, such as the case of Mexican tetra fish who have the ability to repair their own heart tissue. Read more »
Link copied!
Interesting Articles
Fish
Different Types of Water for Your Fish Tank