Moray eels' heads are too narrow to swallow their prey. Therefore, they have a second pair of jaws located in their throat, called pharyngeal jaws. 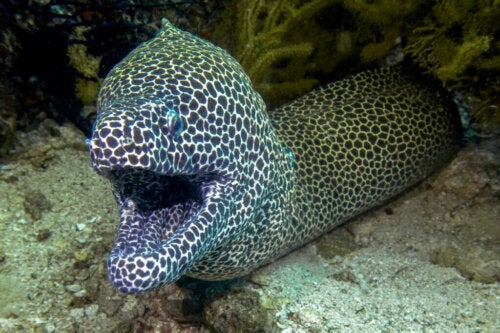 All the species of the Muraenidae family are known as moray eels. They all share the appearance of an eel, that is, a long and cylindrical body. There are currently about 200 species known, distributed in 16 genera.

The largest species, exceptionally large, can reach four meters (13 feet) in length: Satura de Strophidon. These fish live in rocky crevices and are carnivorous. In fact, they are unerring hunters because they have a keen sense of smell.

Undeservedly, these beautiful creatures have gained a reputation as aggressive because they open their mouths frequently and show their teeth. However, this happens because they need to force the water in as their gills are quite small.

Where do moray eels live?

The distribution of this fish family is very diverse. Moray eels live at depths ranging from the surface to 100 meters (330 feet) in depth.

They are known to spend most of their time hiding inside cracks and small caves. Most moray species are found especially in regions with coral reefs, in warm waters. Thus, they live in tropical, subtropical and temperate seas. Although it’s possible to find many species of moray eels in brackish water, very few marine species enter freshwater areas.

It’s worth noting the existence of two species as exceptions: Gymnothorax polyuranodon and Echidna rhodochilus.

How to recognize moray eels?

As mentioned before, their bodies are long. Additionally, they have no paired fins, and display a smooth and thick skin without scales. They also have a very narrow opercular slit, usually a simple hole.

Brownish or blackish purple skin color is common, but tropical species often have a bright or light pattern. In some species, this pattern repeats inside the mouth.

These fish have a strong, angular body that is slightly flat laterally, especially on its underside. The short, massive head stands out, with a rounded profile that has between one and three lateral pores.

A striking feature in a diverse group of eels is their large mouths with numerous long and sharp teeth.

Are they as ferocious as they look?

It’s a popular idea that moray eels are particularly aggressive fish, mainly due to their appearance. In reality, they only attack in self-defense when they feel threatened.

In fact, morays hide from humans in crevices, and prefer to run away rather than attack. Many attacks come from the disturbance of their burrow, to which they react strongly.

It’s fair to point out that attacks also occur during the tourist activity of feeding moray eels, in diving expeditions. It’s interesting to know that moray eels have poor vision and depend mainly on their smell to eat, thus making it difficult to distinguish between fingers and food. This activity was forbidden in some places, such as the Great Barrier Reef.

A little known fact is that the scaleless skin of this fish is often prey to parasites. For this reason, some moray eels can get used to the presence of divers and try to rub their bodies against them and even look for caresses.

Although it’s common in some places to hunt moray eels for food, some species produce toxins. The toxin they have is ciguatera, which is resistant to cooking.

Ciguatera comes from metabolizing another toxin, the maitotoxin, produced by a dinoflagellate (Gambierdiscus toxicus) that is part of the zooplankton. Once the fish ingests the dinoflagellate, the precursor toxin is metabolized and the resulting substance accumulates in the higher trophic levels.

According to experts, this mechanism could be an evolutionary response to threats from potential predators. It’s interesting to know that in some species the protective mucus of their skin secretes this toxin.

In these fish, the space in the mouth is deep, covered with numerous teeth. In addition to the normal teeth that the fish has at the edge of the jaw, many species have the so-called pharyngeal jaws.

These pharyngeal jaws have no bone base and they’re sustained only by muscular ligaments. It’s interesting to know that they look very much like oral jaws and teeth.

When feeding, moray eels advance these jaws towards the mouth, where they catch the prey and take it to the throat.

Moray eels are the only known animals to use pharyngeal jaws in order to actively capture and hold their prey in this manner.

Moray eels are carnivorous and act as opportunistic predators. They feed mainly on small fish, octopus, squid, cuttlefish, and crustaceans. Moreover, they have few predators, only species such as groupers, barracudas and sea snakes.

In the reefs, coral groupers (Plectropomus pessuliferus) may associate themselves with giant moray eels to hunt. This collaborative hunting strategy allows moray eels to remove prey from niches that aren’t accessible to groupers.

Studies suggest that moray eels of the genus Gymnothorax spp. may act as natural predators of the invasive lionfish species. There are no known significant threats affecting the Muranidae family on a global scale.

However, the modification occurring in their habitat of coral reefs may be contributing to the decline in their population.

In this regard, many species of moray eels are considered Least-Concern (LC) species. On the other hand, toxin production isn’t a general trait of all species, hence some are hunted for human consumption.

However, their commercial exploitation is small. Therefore, there are no specific conservation measures for the protection of these species.

The Life Cycle of Eels
Ever wondered about eels? We'll tell you everything you've ever wanted to know about the life cycle of eels and their characteristics. Read more »
Link copied!
Interesting Articles
Fish
Find Out All You Need to Know about Blowfish