The Ocean Sunfish (Mola Mola): Heaviest Fish in the World

Do you know about the ocean sunfish? It's the heaviest fish in the world and can weight almost 3 tons! 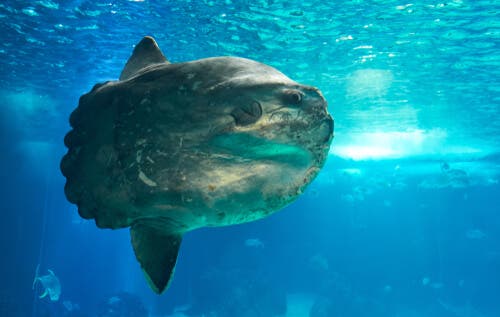 The ocean sunfish holds the title of the heaviest known bony fish in the world. How did it get this title?

The ocean sunfish, also known as Mola mola, is not just an extremely eye-catching fish. It’s also the heaviest known bony fish in the world. Bony fish are vertebrate animals that have fully calcified skeletons. However, these fish may still have certain cartilaginous parts.

Bony fish are very different from cartilaginous fish, such as sharks or rays. Cartilaginous fish have a skeleton made of cartilage except for their jaws, which are made of bone. As a result, we have only found the jaws of prehistoric sharks instead of any other body parts.

In previous centuries, fishers heavily fished sunfish. Their meat was considered a delicacy. Fortunately, today the fish is only consumed in some regions of East Asia. Additionally, its fishing and consumption are completely prohibited in the European Union, as well as in other countries.

Still, the number of ocean sunfish is decreasing worldwide. As a result, the sunfish is a vulnerable species according to the IUCN (International Union for Conservation of Nature).

The sunfish’s anatomy is very unique. Their bodies, when they reach adulthood, are flattened laterally. They also lack a caudal fin (or tail fin). Instead, they have something called a clavus. This is kind of like a tail that gives the fish a streamlined look.

Similar to almost all fish, the ocean sunfish has a darker dorsal area and a lighter underbelly. The changes in color serve as camouflage. For example, if a predator looks at the fish from above, the sunfish blends in with the darkness of the depths below. Alternatively, if a predator looks at them from below, they blend in with the light of the surface of the water.

Another curious fact about sunfish is that it can change its coloring if it feels threatened or is under attack.

Why is the ocean sunfish so big?

We have information about some catches of sunfish. Fishers have found some really huge specimens!

In 1910 off the east coast of Africa near the Canary Islands, a fisherman caught a sunfish that weighed more than 3,300 pounds. That’s equal to one and a half tons! Since then, fishers have caught even larger fish. Some have been over 6,610 pounds.

The journal GigaScience recently published a study showing that sunfish reach their huge sizes due to a fast growth rate. The fast rate is due to a series of genes that cause an overproduction of growth hormone.

In captivity, researchers observed that a sunfish grew almost two pounds a day for 15 months. That’s a total of 880 pounds in just over a year! If we compare this with the growth rate of other fish – between .04 to 1 pound a day – you can see how incredibly fast the sunfish grows.

Threats to the sunfish

In the wild, sunfish don’t have many predators. Their only predators are large sharks, killer whales, and sea lions. However, the real threat to these animals is humans.

Although many countries prohibit sunfish fishing, there are still numerous cases of accidental catches. Fishers sometimes accidentally catch sunfish in fishing nets without meaning to. This usually happens with gillnets or trawl nets, which are illegal in many countries. These nets have caused the disappearance of many other species, such as the vaquita.

Although the ocean sunfish isn’t a commercial fish, it’s important to fish markets in Japan and Taiwan. In these countries, fish markets move between 20 to 50 tons of sunfish meat. Sunfish fishing occurs in the western Pacific and in the southern Atlantic.

However, we hope that in the near future sunfish fishing will stop and people will stop consuming it. This magnificent fish is important to the ocean and to the imagination of many people.

8 Amazing Freshwater Fish
If you are thinking of setting up an aquarium at home, the easiest way is to choose freshwater fish. Find out here about the most popular choices. Read more »
Link copied!
Interesting Articles
Fish
Are There Scaleless Fish?

In certain parts of the oceans, there are high numbers and a great variety of animals. This is a product…