Habitat of a Crocodile: Characteristics and Behavior

Crocodiles have a rather imposing physique that includes an enormous jaw. Thus, this is an animal that causes much fear and respect. Even though they appear to be slow, their deadly power is terrifying. In fact, they claim many lives in their own habitat year after year. 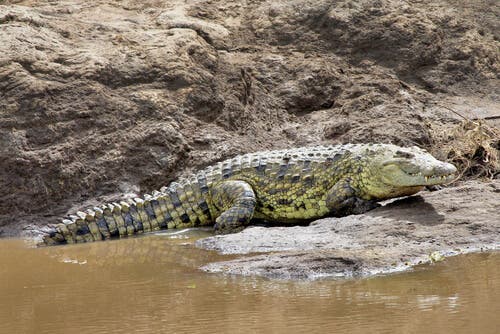 A crocodile in its habitat inspires fear in many people as well as admiration and respect in others due to its dark penetrating gaze. It’s a truly imposing reptile and well worth learning more about. So, how would you like to join us on a trip with them? Don’t worry, we won’t get too close…

Everything you need to know about a crocodile and its habitat

A crocodile’s scientific name is Crocodylidae. It’s part of the archosaur reptile family, or rather, dominant reptiles, due to its strength and aggressiveness. Scientists think that crocodiles have been around for about 200 million years.

A crocodile can weigh up to 800 kilos. Its rough and thick skin is prized by people in the leather goods industry. As you can see, it’s not surprising that a crocodile doesn’t care to hang around humans… And, of course, they don’t, human irresponsibility has endangered their species, after all. This is why crocodile poaching is now increasingly punished by law. In fact, new laws are constantly enforced to try to stop it.

Crocodile nostrils seem to be meticulously created to fit their aquatic lifestyle. They keep water from entering and reaching their lungs while submerged in it. Thanks to this feature, which allows the animal to breathe, the crocodile can remain underwater for six hours, on the move, and up to two days while at rest.

This kind of reptile can regulate its body temperature with its jaws. They open them to either cool-off or warm-up. You’ve probably seen one of the many videos of a crocodile with their mouth wide open when not even trying to attack anyone. They were probably in the middle of the process of regulating their temperature.

A crocodile moves by crawling on the ground with its four legs. They have two at the front and two at the back. Each front one has five toes and the rear ones only four. They use them, to maintain balance along with their long tail. It would be hard otherwise, due to their weight and overall proportions.

This reptile spends most of its life in freshwater rivers, or in mangroves on the saltwater beach. They’re adaptable and move from one habitat to another at will, according to their needs.

Habitat of a crocodile

Crocodiles inhabit the tropical areas of Africa, North America, Central America, Australia, and some parts of Asia. As we mentioned above, they spend most of their life in water, be it sweet or salty.

As far as we know, this animal is carnivorous and its diet is based on fish, crabs, dead animals, birds, and even, on occasions, they’ll attack a buffalo, zebra, or a wildebeest. But how does a crocodile hunt, you ask?

It’s a well-known fact that all reptiles are stealthy, and this specimen is no exception. It gradually approaches its prey underwater while they stop by the river for a drink or two. When the prey least expects it, the crocodile pounces on them and drags them into the river where a fight ensues. Needless to say, the reptile rarely leaves with an empty stomach.

Despite their enormous pointy teeth, a crocodile cannot chew. So when they catch their dinner they break it into large pieces and swallow it whole. This is when their powerful gastric juices come into play in order to finish the process of digestion.

In addition, this animal has the ability to modify its own metabolism based on the abundance or scarcity of food in their habitat. When their pantry is empty, they slow down their digestion. Similarly, they do the opposite in times of abundance.

Is the habitat of a crocodile dangerous?

Only 6 of the 23 existing species are considered dangerous. However, the numbers certainly command respect. This is because about a thousand people die each year as a result of an attack from this animal. The Nile crocodile and the Saltwater crocodile stand out for their danger.

Meanwhile, the alligator subspecies in Florida and the South American alligator are usually the ones that inflict the most attacks on humans.

The human intrusion in their habitat and even poaching them for commercial purposes expose many people, almost permanently, to these risks. Needless to say, it’s impossible to domesticate them because they’re wild animals.

Despite their majesty, crocodiles seem terrifying to many people. They’re a fascinating animal and thus well worth knowing. Don’t you agree?

6 Viruses that Affect Crocodiles
Did you know that crocodiles share some diseases with other animals? Learn more about the viruses that affect crocodiles in this article. Read more »
Link copied!
Interesting Articles
Birds
Differences between Black and White Swans