How the Great Auk Became Extinct

The great auk became extinct in the 19th century, but it's story is still an important reminder of what can happen if we don't take steps to protect endangered species. 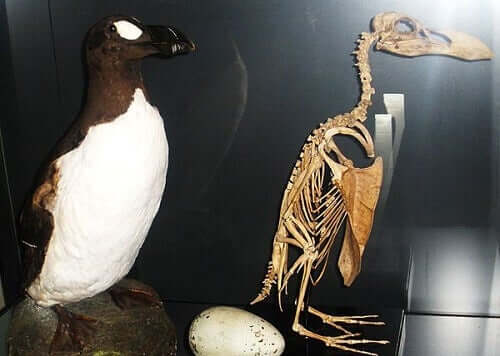 The great auk is a little-known seabird species that became extinct in the early 19th century. Despite not being very well known, its story is a reminder of just what can happen to endangered animals. This bird was the largest member of the Alcidae family, a subspecies of seabirds whose other members include the Razorbill.

The auks and the rest of the Alcidae family are similar to penguins, but this is because they have evolved in a convergent way. This means that they’re not closely related, but due to their ecosystem, they have evolved to have similar features. In fact, penguins are never found in the northern hemisphere where auks live.

The great auk was over three feet tall, weighed about 11 pounds and had black and white fur, just like penguins. They also had webbed feet and a very strong beak for spearing fish. Also, like penguins, they weren’t able to fly, were completely monogamous creatures and laid their eggs on cliffs.

When the great auk was first discovered by the British, they were mistaken for penguins. They inhabited much of the northern hemisphere and lived in North America and many European countries. They even lived in places like Florida or Gibraltar.

Although they were skillful in the water, they were very clumsy on land. This meant that they quickly became extinct in any place where humans arrived.

Numerous remains have been found which demonstrate that they were hunted during the Paleolithic period, including tombs containing more than a hundred beaks. They’re believed to have become extinct in Europe during the 16th century and then in America in the 18th century, leaving Iceland as the last place they could be found.

Although they were skillful in the water, they were very clumsy on land. This meant that they quickly went extinct in any place where humans arrived.

During the Napoleonic wars, the great auk became a coveted prey for sailors docking in Iceland. There, two ships docked and hunted hundreds of them. Then, 20 years later, an earthquake would destroy one of their natural sanctuaries, the island of Geirfuglasker, which sank into the ocean.

The auks that survived the seismic disaster at Geifuglasker migrated, but were disorientated. One was even found dying on the coast of Ireland. Eldey Island, a lone piece of rock famous for its seabird colonies, became the auk’s final home. But they didn’t last long. Now that they were so rare, they became a sought-after collector’s item.

The great auk – a collector’s item

Collectors of skins, bones and other animal parts from distant countries began to take an interest in the great auk. Their eggs became a luxury item, worth up to a year’s salary. As a result, poaching ceased in 1840, with not a single great auk having been seen for years.

However, large sums of money were still offered for auk skin in Denmark, and four years later, Carl Siemsen sent three men to Eldey island to verify that there really were no more left. These three men killed the last known pair, which they found incubating an egg on a cliff.

Today, you can find eggs and stuffed animals in hundreds of museums, but we’ll never see this animal alive again. Or will we? Some research groups advocate reviving extinct animals, including the great auk. This would undoubtedly be great news for the Arctic ecosystem, which has been left without one of its most unique animals.

However, large sums of money were still offered for auk skin in Denmark, and four years later, Carl Siemsen sent three men to Eldey island to verify that there really were no more left. These three men killed the last known pair, which they found incubating an egg on a cliff.