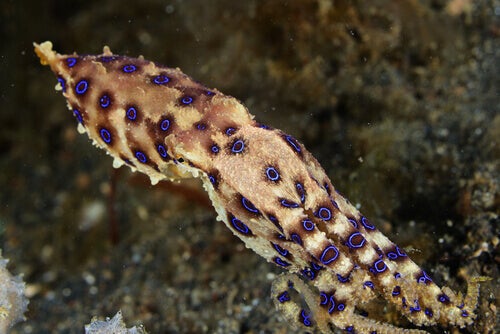 Octopuses are marine animals with eight tentacles, no shell, and feed on both fish and crustaceans and plants. In this article, we’ll tell you about some of the species of octopus that live in the depths of the oceans.

How many species of octopus exist?

In total there are more than 300 species of octopus and all of them live in salty waters, both cold and hot. They differ in size and color. Below are 4 different species:

As its name suggests, the blue-ringed octopus has a clear body with blue circular ‘spots’ that can even change their color to camouflage with the environment.

They’re rather small, no bigger than 8 inches. This octopus moves very quickly when hunting for prey and, if it feels cornered by a predator, it releases a sort of toxic ‘ink’ to escape in a couple of seconds.

The blue-ringed octopus is one of the most aggressive and territorial species that exist. They’ll fight with other octopus for food, shelter, or territory. They’re even dangerous to humans, because their sting can kill us.

From its name we already know two characteristics of this species; they have two spots on their body and they live in Californian waters, although it can also be found in Japan, Mexico, and Africa. The marks are blue and are around the eyes, while the rest are usually grayish.

California’s two-spot octopus is about 16 inches long, and their tentacles are approximately 10 inches long. It’s said to be one of the more ‘friendly’ species because they don’t usually attack and tolerate their ‘relatives’ without problems, except when they compete for food, which is usually crustaceans, mollusks, and small fish.

Its scientific name is Octopus Vulgaris and is one of the largest species. They can measure approximately 3 feet and weigh 20 pounds. They have big heads and huge eyes, which looks odd compared to the rest of their body, and they can change color to camouflage in their environment.

The common octopus is found in all oceans; both in temperate and tropical areas, although it’s more common to find it in the Mediterranean Sea, the Canary Islands, the English coast, the Cape Verde islands and certain parts of Africa.

They’re very intelligent creatures and they can distinguish between objects of different shapes and sizes. They also have an excellent memory and ability to overcome traps and obstacles. They’re also skilled camouflage artists, and can remain hidden in self-created hideaways, with materials they find along the way.

They have a rather short life span – no more than two years – and die shortly after mating; the female can lay 200,000 eggs and protects them from predators at all costs. They’ll even stay with their offspring for 40 days and eat part of their tentacle to regain energy.

Among the known octopus species, this is the largest. Some individuals have been measured at nearly 30 feet long. They can change color and camouflage between corals, plants, and rocks. Their lifespan is longer than any other octopus – about four years – and it’s said to be the smartest invertebrate since they can figure out mazes and uncover bottles.

They live in the temperate waters of the Pacific Ocean, from southern California to Alaska, and also in Japan. These creatures hunt by night and feed on fish, lobsters, crabs, clams, and shrimp. They reproduce in summer when the male passes the sperm to the female and the female takes care of laying up to 100,000 eggs in the shallow waters.

What Are the Differences Between Squid and Cuttlefish?
While these two animals are often confused, there are many differences between squid and cuttlefish. We'll take a look at some! Read more »
Link copied!
Interesting Articles
Invertebrates
The Cricket: Is It a Pest or Good Luck?