5 Species of Crabs that Will Surprise You

Most of these crustaceans live on the bottom of the sea. They come in a variety of shapes, colors, and even shapes. In fact, there's even one that looks just like a spider! Want to know more? Today we'll tell you about 5 species of crabs that will surprise you. 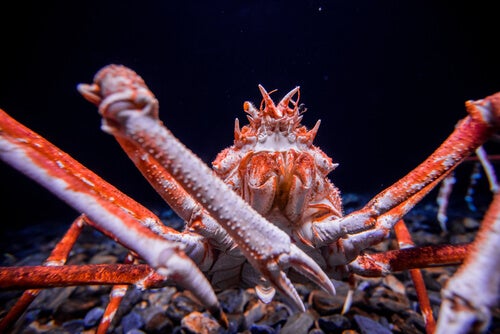 An animal family that consists of over 4000 species is bound to be full of surprises. These crustaceans, known for their claws, shells, and the fact that they walk sideways, inhabit the floors of almost every ocean. Would you like to know more about some of the most impressive examples? Below, we’ll tell you about 5 species of crabs that will definitely surprise you.

5 crab species that will surprise you

Most species of crabs crawl along the ocean floor and only a few actually swim. What’s more, they have 4 legs on each side and 2 claws. These claws allow them to capture and handle food and fight over territory. Furthermore, during mating season, these claws allow male crabs to court female partners.

Just like other arthropods, these animals also have an exoskeleton which they shed on various occasions throughout their life. Several suborders and species of crabs exist around the world, and the most well-known are the following:

This crab belongs to the spider crab group, all of which have a triangular shell and long legs that can measure some 10 feet long. This species, Macrocheira kaempferi, lives in the depths of the Pacific Ocean, along with one of the Japanese coasts. Although it’s blind, it has hairs that are sensitive to waves, along with very sensitive ears.

This name doesn’t refer to just one species of crabs, but rather several different species that share a specific quality. To be more specific, hermit crabs use conch shells in order to cover their abdomen, the softest part of their body. There are some 500 types of hermit crabs, and most of them are aquatic. However, there are also a few that live on land.

So, why do hermit crabs use conch shells for shelter? It’s because their exoskeleton only covers the front of their bodies. And, what’s even more interesting about these species, is that, as they grow, they have to “move” into a larger home.

Hermit crabs are scavengers, meaning they feed on dead creatures. However, their diet may also include some snails, worms, clams, larvae, and plants mixed with sand. As for their reproduction, female hermit crabs carry their eggs under their abdomen. Then, once fertilization takes place, they release the eggs into the sea.

The blue crab, or the Callinectes sapidus, is a crustacean that has 5 pairs of legs. Despite its name, the exoskeleton that covers its body is actually dark green. However, some males have a grayish-blue shell.

This crab is very fast and active. Its diet consists of fish, algae, mollusks, and other crustaceans. As for its average life expectancy, the blue crab can live for up to 8 years. And, just like the rest of its family, it’s oviparous. In fact, each spring and summer, females lay between 700,000 and 2 million eggs.

Blue crabs live in the Atlantic Ocean, all the way from Scotland to Argentina, but especially along the Gulf of Mexico. They prefer tropical coasts, bays, estuaries, river mouths, and coastal lakes that are no deeper than 6 and a half feet deep.

This crab–Procambarus clarkii–inhabits the slow-moving rivers and cold waters of the southeastern part of the United States. Given its ability to grow rapidly and withstand droughts, this species is considered invasive. What’s more, the Louisiana crawfish can live for around 5 years and feeds on just about anything… dead creatures, animals, or plants.

In this final case, it’s difficult to know whether you’re looking at a crab and or a spider that can swim. This crustacean is a relative of the Japanese spider crab, but only because of its triangular shape and long legs.

As for its size, this species only measures up to about 4 inches, and its body is dark brown with gray claws. It feeds on worms and crustaceans and inhabits the reefs and rocks of the Atlantic Ocean–from the United States down to Argentina–in order to camouflage itself without any problems.

Differences Between Crabs and Velvet Crabs
In addition to their colors and sizes, there are more differences between crabs and velvet crabs that can help us distinguish the two.  Read more »
Link copied!
Interesting Articles
Invertebrates
The Cricket: Is It a Pest or Good Luck?