How Pearls Are Made?

It takes an oyster decades to make a pearl. They’re made from particles that enter their bodies making them one of the most highly prized jewels on the market. 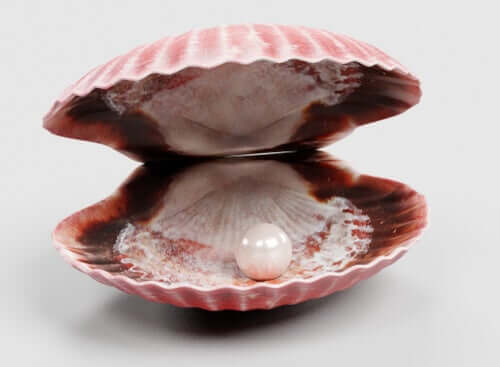 They’re very appreciated in the jewelry world and used to make necklaces or earrings. However, a very complex biological process forms these whitish spheres. In the following article we’ll tell you how pearls are made and the different types that exist.

How pearls are made

Pearls are spheres made from mother-of-pearl and are formed inside the soft body of mollusks – bivalves such as oysters. They use their bodies to manipulate particles that enter.

But we need to understand more about these marine beings before delving into the effort they put into making pearls. First of all, it’s an animal that has two ‘parts’ that join together by an articulated membrane, which opens or closes according to its needs.

Inside the shell it has organs such as the mouth, the digestive system and muscles. A layer covers and protects them and prevents inedible particles from being swallowed and causing adverse health effects.

Since it can’t prevent access to the particles, they react by covering themselves with layers of calcium carbonate crystals and a protein known as conchiolin.

After protecting themselves for around 10 years, they create a near-perfect sphere that we know to be a pearl. Therefore, these precious jewels are born from a very complex biological process.

Pearls come in different shapes, sizes and colors, from circular to teardrop and from white to black. There are three basic criteria for evaluating and pricing them.

Pearls have been used as jewelry for centuries and are popular among royalty and people with high purchasing power.

Natural pearls are very expensive because they’re hard to come by and take a long time to form. Moreover, not all oysters make them. Only 1 in 10,000 can end up making these beautiful spheres.

This doesn’t mean that the demand for pearls is low – quite the opposite. The demand was so high that people began to produce them artificially. We know these pearls as ‘cultured’ pearls.

To get your hands on this type of pearl, we have to recreate nature. 99% of pearls sold in stores aren’t natural. This is the artificial process: the oyster opens and creates a gap in the protective layer, then humans introduce an irritating element.

The animals react by producing the mother of pearl to cover the foreign body. They’re forced to protect themselves from a huge number of foreign bodies which leads to them creating the pearl in record time, compared to those that live at the bottom of the sea.

Artificial pearls aren’t appreciated as much as natural pearls even though the quality and manufacturing process remains the same.

Now it’s time for you to learn about the different types. Depending on where they come from, they have different colors and features.

Humans create these artificially in Northern Australia, Indonesia and the Philippines and they have three different shapes: perfect sphere, teardrop and irregular. They take between three and nine years to form, can be white, pastel or black and measure between 0.3 and 1.1 inches.

Grown in the salt waters of Japan, they’re difficult to form and always have a round shape. They can range from pink to beige and can measure between 0.2 and 0.3 inches.

You can find these pearls on the islands of the Pacific Ocean specifically in the region of French Polynesia. They’re popular because they’re black and because they can be as big as 0.5 inches.

Another Japanese pearl. This one is different because it grows on the mollusk’s shell meaning they’re flat rather than round. They’re great for making earrings. It takes them approximately two years to grow.

The only pearls to grow in the freshwater rivers and lakes of China. They’re the cheapest on the market because of their low quality. They take between six months and four years to form.