6 Fascinating Beetle Species to Amaze You

This is the animal family with the most members in the animal world, with different bodies and bright colors; they are spread all over the world. Discover 6 fascinating beetle species. 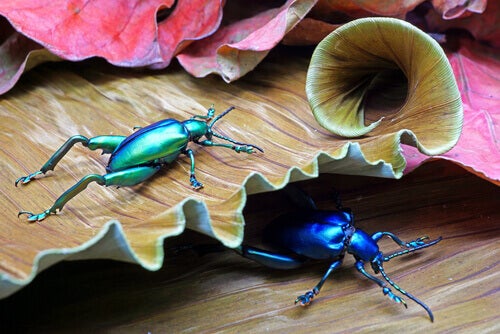 Of all the fauna that populates our planet, those we undervalue the most are our insects. Among them, beetles are amazingly beautiful and are essential to the health of our forests. Today, we invite you to discover six fascinating beetle species.

Beetles are actually a very large family that consists of more than 375,000 different species. They live all over the planet and represent the community with the most members in the entire animal kingdom.

Since this group consists of so many different species, we can find a great variety of bodies, habits, and colors. There are beetles that are barely half an inch long, while the largest ones can weigh up to 3.5 ounces.

Within all this variety, there are many fascinating species of beetles. They have all different sizes and live in opposite parts of the planet, but are all equally beautiful and interesting.

The frog-legged leaf beetle, whose scientific name is Sagra buqueti, appears in the cover photo of this article. Just by looking at it, you can guess where it gets its name. Its body size is barely a quarter of an inch long and it has a great sexual dimorphism: Males are much larger than females.

Another important characteristic of these insects is their vibrant coloration. They display iridescent green tones, although they also have red and gold reflections; they live in Malaysia and Thailand.

The stag beetle (Lucanus cervus) is one of the largest beetles in existence, reaching 4 inches in length. In addition to their enormous size, the large jaws of the males are characteristic, reminiscent of the antlers of a deer.

Its habitat is divided between the forests of Europe and Asia. It’s the largest insect in Europe. However, in Asia, it has other competitors, including both beetles and other insects, and it has to make do with a more modest position.

Although they don’t physically resemble other beetle species, ladybugs also belong to this family. They’re one of the most friendly and well-known insects, and although we always think of them as red with black spots, they can have many other shapes and colors too.

Ladybugs are spread all over the planet and are a great weapon against crop plagues, such as those caused by aphids. This is their favorite food, and where there are aphids, there’ll be ladybugs.

What we refer to as the goliath beetle is actually several different species, although they’re very similar to each other. These insects are the biggest insect of all, although not the longest. Adults are only 4 inches long, but weigh up to 3.5 grams.

Goliath beetles live in the jungles of Africa and feed on pollen and fruit. They have a striking coloring, composed of different combinations of black and white, in the form of spots or stripes.

The golden tortoise beetle is one of the most fascinating species of beetles and is highly appreciated for its unusual body. Part of it is covered with a metallic gold color, and the other part has no color pigmentation and is transparent.

However, this animal is not always the same color. If it gets angry or stressed, it may change color. There are several species and each one reacts in a different way, but usually it darkens to a dark brown tone. When this occurs, it stops being so attractive to the eye and passes itself off as another common beetle.

It’s a small beetle, barely measuring 5 to 7 millimeters in length. It feeds exclusively on morning glory leaves and can be found in North America.

Physically it’s not as beautiful as the rest of the beetle species on this list. However, the metrius contractus or bombardier beetle has an amazing characteristic – it has a chemical weapon to escape from its enemies.

When this beetle feels threatened, it’s capable of propelling a jet of a corrosive and foul-smelling chemical compound several yards away. In this way it can protect itself from those who want to eat it, but also from other animals or insects that are bothering it.

Insects are underrated and there’s very little we know about them. Within the families of insects, however, there’s a great variety of beauty, shapes, and colors–and beetles are a great example of this.

The Stag Beetle: The Biggest Beetle in Europe
The stag beetle is a spectacular beetle that lives in Europe and parts of Asia. It has a very specific habitat and it's at moderate risk of extinction. Read more »
Link copied!
Interesting Articles
Invertebrates
Characteristics of Four Types of Scorpions