Beetles have an important role in nature, helping to preserve ecosystems due to their multiple metabolic and dead matter degradation functions. Today we'll take a close look at the golden tortoise beetle. 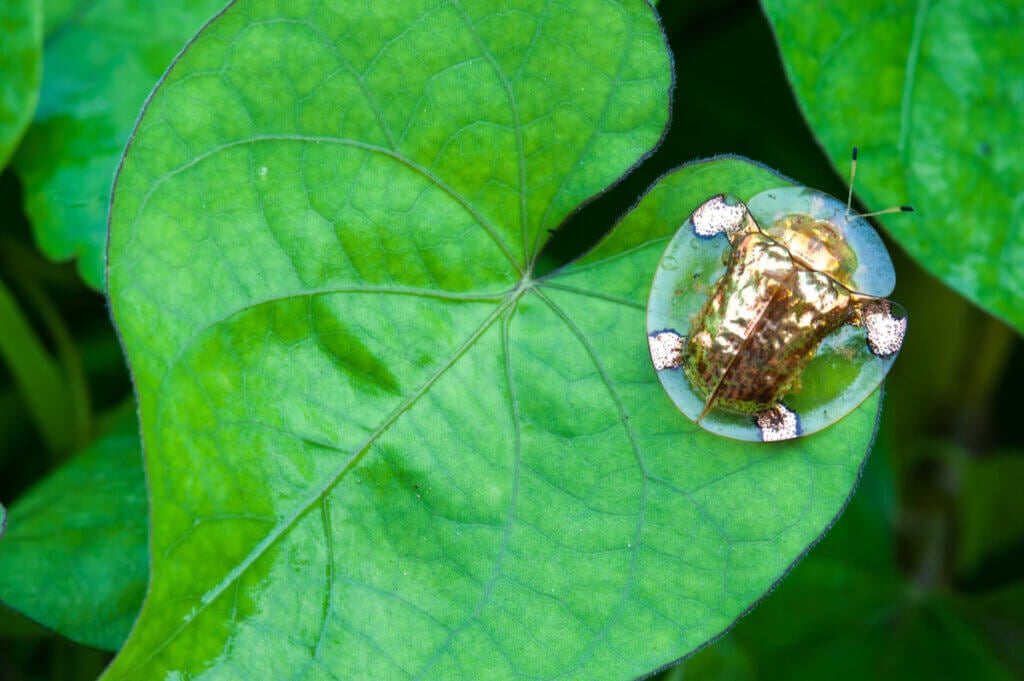 In the nomenclature of animal names, we find one as curious as the golden tortoise beetle. This species of arthropod gets its name from its peculiar shape and color.

Of all the existing beetle species, it’s not one that people know a lot about, perhaps because of its distribution. For this reason, we’d like to take the opportunity to mention some characteristic aspects of this species.

Details about the golden tortoise beetle

Beetles are insects that play an important role in nature. They’re able to live in any type of ecosystem and are responsible for degrading various remains of organic matter. What’s more, they were worshiped as gods in Egypt.

In addition, we can appreciate other interesting qualities as well, from bioluminescence to swimming. Aside from all this, we can find all sorts of diversity among these creatures. For example, ladybugs are beetles even if they don’t look like it.

The scientific name of the golden tortoise beetle

The golden tortoise beetle is an arthropod that falls into the category of coleopteran insects. At the same time, it belongs to the chrysomelid family and goes by the scientific name Charidotella sexpuntacta.

However, we can also identify it with another scientific name, Metriona bicolor. You can find this beetle by this name in books and ancient articles.

The golden tortoise beetle is a small insect, with a length of .2 t0 .28 inches. Its name alludes to its appearance, with the word tortoise referring to the shape of its body. Its “shell” has transparent margins because they lack pigmentation, which expand to the sides. When observing these margins, its shape reminds one of a turtle’s body, with its shell, legs, and tail.

With respect to the other part of its name – golden – this has to do with variation in the tonality of its body. It can take on colors between orange and gold, always with a metallic touch.

In addition, another curious detail is that according to its “state of mind”, these beetles change color. To be more specific, when the insect is upset, its bright golden tone becomes dark brown.

Although scientists haven’t investigated the cause of the color change in this species, they have studied the same in the C. egregia. It seems that this change has to do with the hydration and dehydration of the insect.

When the beetle’s elitric margins are hydrated or dehydrated, the control valves cause the color change. This causes its body to change from bright gold to reddish brown.

Thus, the striking color of this species can vary according to its mood or moisture level. It can also display small black spots on its body.

With respect to its distribution, the golden tortoise beetle comes from North America. Specifically, in the southern region of the country, although it also appears in South America.

This species is fundamentally herbivorous, as it feeds on leaves of the species Ipomoea purpurea. This is the morning glory, a plant that’s typical of tropical and temperate regions of the world.

Within the different types of reproduction, beetles fall into the category of oviparous animals. This means that they lay eggs of different shapes and sizes.

In the case of the golden tortoise beetle, the females lay flattened, white eggs. When it’s time to lay them, they place them on the stems of plants or on the undersides of leaves. Then, the reddish colored larva takes about 5 to 10 days to emerge. After hatching, it adheres to skins or feces, and the adult emerges after two weeks.

Research has identified the presence of natural enemies of the golden tortoise beetle, which are two species of wasp and fly parasitoids . One of its parasites is the tachinid fly which goes by the scientific name of Eucelatoriopsis dimmocki. The other is the eulophid wasp Tetrastichus cassidus.

The larvae of these beetles can also be exposed to other predators. These include ladybug beetles and various species of bedbugs, such as damsel bugs.

In short, the golden tortoise beetle is a North American arthropod. Of all its traits, the tone and shape of its body are the most distinctive. As you can see, nature is full of unique and interesting creatures. If you want to discover another example, just take a look at the grolar bear, a hybrid animal.

Everything You Need to Know about Your Pet Beetle
Coleoptera, better known as a beetle, is an animal people seldom think of as a pet. However, they're all the rage now due their ease of care. Read more »
Link copied!
Interesting Articles
Invertebrates
Characteristics of Four Types of Scorpions