Certain invertebrates choose to mimic some ant species. These insects are quite dangerous and not very appetizing, so in this way they avoid being eaten. 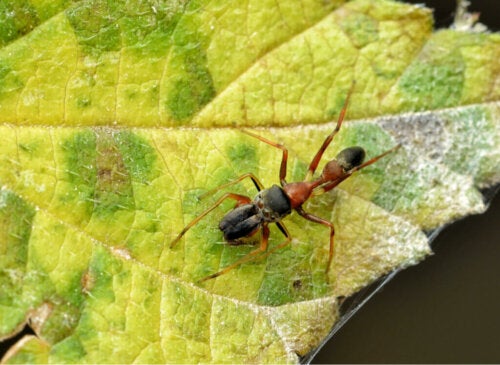 Myrmarachne is a genus of Araneomorphae spiders from the family Salticidae, which stand out for an exceptional quality in the animal kingdom. Many species of this taxon are antlike spiders, both in terms of physiology and behavior. Surprising as it may seem, this has a clear evolutionary reason.

Most ant-predatory animals —such as the anteater— are highly specialized in this type of diet, as these insects are quite unpleasant to the taste and, in many cases, aggressive and even toxic. For this reason, several invertebrates and vertebrates avoid ants when looking for prey.

The art of mimicry

Mimicry is the capacity of certain living beings to look like others. This is different from crypsis, which is the ability to go unnoticed in the environment. Crypsis is, for instance, the strategy adopted by stick insects or leaf insects.

Many animals adopt the appearance of others for various reasons: to appear dangerous when they’re not, to attract certain living beings for reproductive purposes, or to divert the attention of predators to other parts of their body, for example. This evolutionary strategy is widespread in nature.

Looking like an ant can bring multiple benefits in the natural environment. There are two main reasons for adopting this strategy, as follows:

There are several antlike animals in various invertebrate taxa, including certain crickets, beetles, mantises, and stick insects —especially in the early stages of development— and, clearly, several groups of spiders.

Studies show that more than 300 species of arachnids imitate ants in behavior, physiology and response to predators. In turn, 14 genera from the Salticidae family have adopted this curious strategy. These spiders suffer a series of changes, such as:

However, it’s necessary to emphasize that there aren’t only advantages. Antlike spiders have much narrower abdomens, so they can lay far fewer eggs when it comes to reproduction. This is a clear example that, in nature, every adaptation comes with a certain biological “catch”.

Another striking trait that’s worth mentioning has been uncovered by some studies that explore the evolutionary origin of antlike spiders. Some of these scientific papers argue that the existence of spider wasps may have been a clear driver for the emergence of this strategy.

Pompilid wasps (Pompilidae) are a family of more than 5,000 species in 4 subfamilies. These species of Hymenoptera are famous for paralyzing spiders and placing their eggs inside them. Thus, when the larvae hatch, they can feed on the immobilized arachnid.

These wasps locate spiders by visual clues, so an antlike spider successfully confuses them, and it survives another day. This is one of the hypotheses that could explain this type of mimicry. However, it hasn’t been confirmed.

As you may have noticed, in nature, everything has a clear explanation and nothing is left to chance. On one hand, antlike spiders have had to sacrifice certain positive traits of their ancestral taxa. On the other, they can now avoid the threat of multiple predators.

The Most Adorable Spiders in the Animal Kingdom
Salticids are small, adorable spiders that love to jump. Today, we'll take a close look at some of their most peculiar characteristics. Read more »
Link copied!
Interesting Articles
Invertebrates
What Are the Most Dangerous Stings?