These highly intelligent mollusks are capable of camouflaging themselves and solving puzzles. Their DNA variations led to theories that stated that they came from meteorites that fell on Earth. Are octopuses 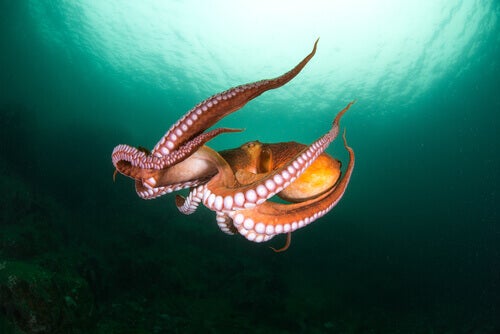 Are octopuses aliens? This is the crazy theory that more than 30 researchers from around the world believe, due to the theory of panspermia. This states that the origin of life couldn’t be planet Earth, and that not only meteorites, but also complete living organisms, have reached our planet, which would have given rise to new evolutionary lineages.

The origin of life

Abiogenesis is the theory that the environmental conditions of our planet millions of years ago allowed organic chemistry to react and create life. On the other hand, the aforementioned panspermia states that life came from space.

There’s a possibility that life originating on Earth may have explosions of life or evolutionary turns through the arrival of living organisms from space, as this method could bring viruses, bacteria, or even fertilized seeds and ovules.

Some viruses support the theory of the extraterrestrial origin of life. They say that retroviruses, infectious agents that appeared 460 million years ago in the ocean, have evolved with their hosts. This is because they’re capable of being transmitted to offspring, as if they were part of the DNA of the father or mother.

These viruses are capable of modifying the DNA of the host, which could have caused an enormous diversification of life. The authors of these studies believe that the galaxy is an ecosystem and, just as the species on planet Earth exchange DNA through fauna passages, living beings could exchange DNA between planets.

Although the exchange of viruses and bacteria doesn’t seem too outlandish, perhaps that of large animals such as cephalopods is. These animals, which include cuttlefish, octopus, and squid, have a confusing evolution. Experts don’t completely know where they come from.

Octopuses are very curious animals, as they have a complex nervous system. They also have several brains. The eyes are very sophisticated and the unique way of camouflaging is incredibly futuristic. This makes some experts think that an extraterrestrial origin is behind its incredible DNA variations.

Its closest relatives, from the Nautilus genus, have significant genetic material variations that evolutionary theory doesn’t seem to explain. Wild theories try to explain it with the arrival of the octopus, or of agents that varied its genetic material, by means of meteorites, which would support the hypothesis that octopuses are aliens.

Why are octopuses so special?

There’s no definitive proof that octopuses are aliens. But what we do know is that they’re one of the most intelligent animals, especially among invertebrates. Perhaps this is because more than two-thirds of its nervous system is outside the brain. This is very unique in the animal world.

Octopuses are able to learn through imitation and observation, something that most invertebrates can’t do. They’re also capable of imitating other animals, such as venomous fish and jellyfish, to avoid being disturbed.

Curiously, even though they have a great learning capacity, they learn many of these behaviors on their own. In fact, they don’t know their parents and are antisocial animals. In addition, their eyesight adapts to light changes and they have a phenomenal sense of touch, which allows them, along with their intelligence, to open bottles or unscrew caps.

What Are the Differences Between Octopuses and Squid?
Octopuses and squid, although they may seem to have the same characteristics, actually differ in many aspects. Discover more! Read more »
Link copied!
Interesting Articles
Invertebrates
The Cricket: Is It a Pest or Good Luck?