All living things reproduce in one way or another, no matter how evolutionarily simple they may be. Worms aren’t the exception. In this article, discover how worms reproduce. 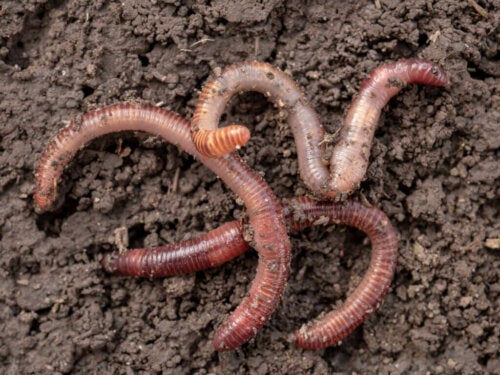 You probably know how certain groups of animals, such as mammals, birds, or reptiles, reproduce, as it somewhat resembles human reproduction. But do you know how worms reproduce? You’ve likely never thought about this issue.

Many soft-bodied and elongated animals are called “worms”. In this interesting article, you’ll discover the types of species that biology considers “worms”, as well as how worms reproduce. Don’t miss it!

A worm is any soft-bodied elongated animal that has no limbs. They’re usually anatomically simple animals with underdeveloped respiratory and/or circulatory systems. Thus, many worm species breathe, excrete, and absorb nutrients through the skin.

There are three big groups of worms that experts classify by their body shape. They’re the following:

Different worm species can inhabit both land and water. Besides being food for insectivorous animals, they have many other ecosystem functions.

Whether by fertilizing the soil through their droppings (they break down organic matter) or even acting as indicators of water pollution or contamination, worms play many essential roles in nature.

Worm reproduction varies by group and species. However, we can boil them down to two main ones. They’re the following:

Some species reproduce by copulation, while others are capable of choosing one of the two reproductive systems. In fact, some are even self-fertilizing. In nature, evolution grants living things the tools they need to survive.

Curious examples of how worms reproduce

Although worms can only reproduce in two ways, some species’ reproduction varies so much that it’s almost a mix between asexual and sexual. Curious? Here are some jaw-dropping examples.

Flatworms have the most complex sex organs in the animal kingdom. Most are hermaphrodites and they always resort to internal fertilization, through a complex process.

Their body is divided into segments, each with both male and female reproductive organs. Each of these segments can house eggs resulting from sexual reproduction or by creating a new individual through parthenogenesis, asexually.

Nematodes can reproduce sexually through parthenogenesis. In other words, by producing their own eggs and sperm and self-fertilizing. They can also fertilize each other using their copulatory spicules.

Experts also call this group of worms velvet worms, due to their velvety texture and somewhat wormlike appearance. There’s a marked sexual dimorphism in this species, as females are bigger and usually have more legs.

The curious thing about these worms is that fertilization occurs by hypodermic impregnation. In other words, the males leave their sperm inside the female’s genital opening. In addition, they’re ovoviviparous, which means that the young emerge from the eggs after the female incubates them inside her.

This genus, commonly known as boneworms, can be usually found devouring gray whale skeletons. The curious thing about this genus is that, at first glance, there only seemed to be female specimens. This surprised scientists, since they didn’t seem to reproduce asexually.

However, further analyses with microscopes verified that there were also male specimens. They were microscopic in size and lived within the lumen of the gelatinous tube that surrounds each female. A single female can house hundreds of males inside her tube and lay thousands of eggs throughout the year.

Conclusions on how worms reproduce

As you can see, worm reproduction is fascinating. Although worms aren’t very pleasant to look at, once you begin to discover more and more about them, they become increasingly fascinating.

In short, worms are a clear example that every animal plays an important role in nature. Without these small invertebrates, the ecosystems we enjoy today wouldn’t survive.

Are There Plastic-Eating Worms?
The discovery of plastic-eating worms or larvae is shrouded in hope and skepticism. Here's some hopeful data on the topic. Read more »