The 5 Most Venomous Spiders

The venom of some of these species can be lethal to humans if not treated in time. 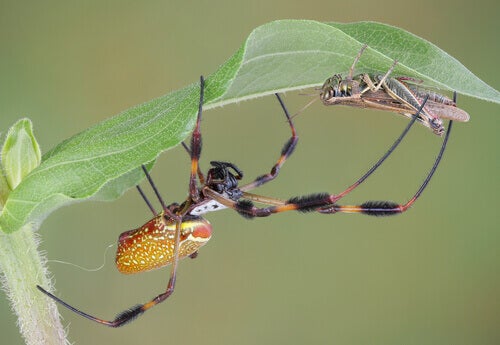 We fear them, we’re repulsed by them, and they scare us when we see one at home. It should be said that some of them are harmless, but in this article we’re not going to talk about those. Instead, you’re going to meet the most venomous spiders that exist. This way, you’ll be able to recognize them and escape if by some chance you come across one.

What are the most venomous spiders?

Some people think the most venomous spiders are the ugliest or the biggest ones, but this isn’t true. Some of them are small, and as for their beauty, that depends on your perception. What we can say for sure, and objectively, is which ones can inject the most toxic venom:

Also called the ‘banana spider‘, this is the most toxic spider in the world according to studies. As if this weren’t enough, they also look very scary—they’re as big as the palm of your hand—and are quite aggressive.

The Brazilian wandering spider—like the one in the photo at the top of the article—has two large eyes in front and two smaller ones on its sides. Its body and legs are hairy.

They live in jungles in Peru and Brazil, especially in banana plantations. If they bite a person,  they will experience loss of muscle control, breathing difficulties, and death by asphyxiation within a few hours, if they don’t get treatment in time.

Also known as the fiddleback spider, these arachnids hide in hard-to-reach places. They’re native to South America and are the most dangerous of the Loxosceles genus because their bite can be lethal. The venom they inject is 15 times more toxic than that of a cobra.

The fiddleback spider is brown and measures about 1.2 inches with legs extended. They have a black line on the thorax which resembles a violin. They’re nocturnal and tend to increase their activity in hot weather.

3. The most venomous spiders: the black widow

This is another of the most venomous spiders in existence and one of the most famous, so much so that there are characters, movies, musical groups and television shows named after them. They’re called black widows because the female eats the male after reproduction.

Although their bite isn’t lethal to humans, it’s quite harmful due to its size. Their venom glands are large in comparison to their body. In addition, the bite of a female is three times more powerful than that of a male.

This large spider (females measure about 2.8 inches and males 2 inches), is native to Sydney, Australia. It’s very dangerous because it has large venom sacs ‘at the ready’ and will use them as needed.

Their bodies are black with shiny, hair-covered legs, and their fangs and claws are visible. They usually live under rocks and fallen timber, as they prefer damp, dark places. They can kill children with their bite and, in this case, the male is more deadly than the female.

The last of the most venomous spiders on this list is also called the hunting spider, and, although they’re very dangerous, the truth is that they don’t usually attack, preferring to flee in the face of danger. Most wolf spider bites happen when they’re hidden in a shoe or glove and get trapped. In more serious cases, a bite can cause localized muscle necrosis.

The wolf spider inhabits the temperate and warm regions of South America, especially Brazil. They have eight eyes in three rows, long, spiny legs and are predominantly black with red or yellow spots. They measure about 1.2 inches, feed on cockroaches, moths, and crickets, and are mainly nocturnal.

Is Scorpion Venom as Deadly as Most People Think?
The effect of scorpion venom isn't the same in every stung animal, this is because every species has a different methods of attack. Read more »
Link copied!
Interesting Articles
Invertebrates
Discover How Worms Reproduce

Invertebrates
5 Animals that Feed on Blood

Animals that feed on blood are known as hematophagous. And, although they're not abundant on the planet, they're worth highlighting. Some are surrounded by legends, others harass our pets, and…