This country is known for its great biodiversity. Learn about Brazil's incredible fauna and the endemic species that can only be found there. 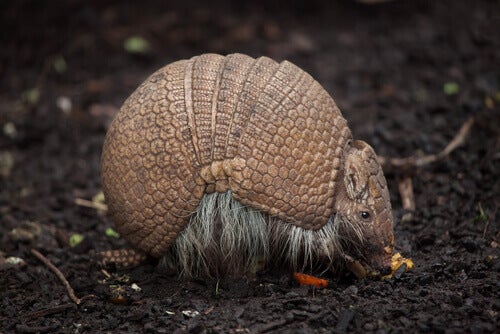 Brazil is the largest country in South America and one of the largest countries in the world. It’s also in the ranking of nations with the greatest biodiversity. The Amazon is its main ecosystem and, in this article, we’ll tell you all about Brazil’s incredible fauna.

The plant and animal diversity in Brazil is amazing. Also, many of the species that inhabit this country are endemic—not found anywhere else—and there are animals from all the families. Brazil’s fauna has the largest number of species of mammals and freshwater fish, it’s second in number of amphibians, third for birds and fourth in reptiles. Some of the animals are:

This is one of the endemic animals of Brazil and it has the ability to turn into a ball when it feels threatened. The three-banded armadillo, which can be seen in this article’s featured photo, is so famous nationally that it was chosen as the mascot for the 2016 World Cup.

It lives mainly in the dry thorn scrub and in the shrubby savanna, to the northeast and center of Brazil. It weighs 3.5 pounds and measures about 18 inches (in addition to its 3-inch tail). Its body is covered by an ‘armor’ of keratinized scales that, in addition to protecting it, allow it to thermoregulate its body temperature. In addition, this animal feeds on ants, termites, worms, and mollusks.

When it comes to Brazil’s incredible fauna, we can’t ignore the birds. It’s very difficult to choose just one of the many species that inhabit the country, but the blue and yellow macaw is one of the most famous.

It inhabits the entire Amazon basin, living in groups of up to 30 birds and, once it has chosen a mate, the two will never separate. Also, they nest every two years and the female lays about three eggs, which she incubates for almost a month.

The macaw has blue feathers on its upper body and yellow feathers on its chest and the inside of its wings and tail. Its beak and legs are dark, and its face is white with black lines. In addition, this bird feeds on fruits and seeds.

The largest feline in the world is also part of Brazil’s incredible fauna. Although their natural habitat includes the area from the southern United States to northern Argentina, there are also small populations in Central America and northern South America.

Unfortunately, the main causes of the decline in the jaguar population are people hunting them for their beautiful fur, and the destruction of jungles and agriculture.

The Brazilian subspecies lives around the Amazon and Orinoco rivers. Its body is robust, it has a long tail, a very large head, and a prominent jaw. Also, its coat is yellow with dark, irregular spots; each jaguar has its own spot pattern. In addition, it feeds on all kinds of prey, as it’s a strict carnivore. It takes advantage of any hunting opportunity that comes its way.

Also known as ‘boto’ and involved in various myths and legends, the pink dolphin is a river cetacean that lives in the Amazon basin. It can measure 8 feet long and weigh up to 400 pounds (males are up to twice as large as females) and, as its name suggests, its body is pink. The strange thing is that when they’re born, their bodies are gray and their tone changes as they grow. Also, the adult males have the lightest color.

Unlike oceanic dolphins, pink dolphins are lonely creatures and they don’t live in groups. They only live in pairs during breeding season or when the female is responsible for feeding her young. Also, the pink dolphin eats all kinds of fish, including piranhas, river turtles, and crabs. Thanks to their teeth, they can easily break shells.

Another representative of Brazil’s fauna is the crocodile. It can reach almost 10 feet in length and it gets its name from the green and gray spots on its body. The younger ones have a ‘striped’ pattern that tends to disappear as they get older. Also, they use their color to blend in with tall vegetation.

This crocodile lives in swampy regions and its diet is made up of snails, mollusks, crustaceans, reptiles, and small mammals.

Discover 5 Species that Inhabit the Amazon River
Today we want to tell you about 5 species you can find in the waters of the Amazon River, the longest and most abundant in the world. Read more »
Link copied!
Interesting Articles
Mammals
What Are the Differences Between Jaguars and Leopards?