What Are Endemic Animals?

These species can only be found in a specific region unless they’re in captivity. Many of them live on islands because of the isolated ecosystem. Madagascar is the perfect example of having species unique to the country. 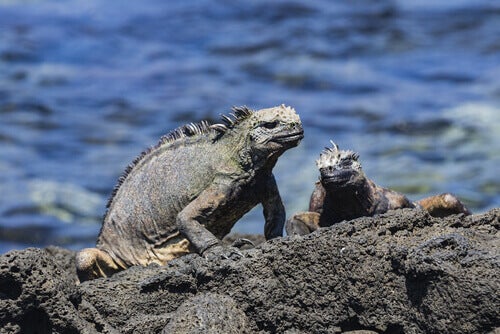 What are endemic animals?

By definition, an endemic animal – or plant – is a species that only lives in one specific place. This means that it’s native to only one region of the world. Therefore, it’s only possible to find them in that specific habitat, except, of course, if they live in captivity.

Endemism can be based on several geographical scales, for example, there are endemic animals from high mountains, archipelagos, a continent, or a lake.

Islands are typically full of endemism because they’re isolated. So, animals from New Guinea, the Galapagos Islands, and Australia are often native to there and nowhere else.

One of the most interesting cases is Madagascar, where all amphibians, 90% of reptiles, 55% of mammals, and 50% of their birds are endemic. You’d have to visit to discover them!

To understand better which animals are endemic, below we’ll talk about some examples:

This reptile – from this article’s first photo – lives only on the Galapagos Islands, on the rocky shores of the archipelago and between mangroves and beaches. They live on seaweed. But only adult males can swim, therefore the others must wait for the tide to go out to eat.

Another difference between the sexes (or sexual dimorphism) is their size. Males are twice as large as females. Something that males and females have in common is they like to lie down in the sun for most of the day, as they have cold blood. They have black skin which helps absorb more heat.

As its name indicates, this carnivorous mammal with a short tail and long legs lives on the Iberian peninsula. Their pointed, black ears, and three different coat patterns that help them camouflage, are the main physical characteristics of this feline.

The Iberian lynx is in danger of extinction, and currently only lives in Andalusia. Specifically in the Sierra de Andújar, Doñana and Sierra de Cardeña, and Montero natural parks. They prefer forests and shrubs for hunting rabbits, which make up 90% of their diet.

We automatically associate Madagascar with a particular primate with a long, black and white tail, and an odd-looking face thanks to its large eyes and raised ears.

The lemur is one of the many endemic animals on this island. They’re nocturnal and have a keen sense of smell that allows them to find food among the trees and pastures, as well as to communicate with the other members of their group.

They’re the only predator in the Arctic, and only live in the polar and icy areas of the northern hemisphere. They’re considered one of the largest terrestrial mammals in the world, alongside the Kodiak bear.

The polar bear has very well developed legs for walking between ice plates and for swimming long distances in search of food, mainly baby seals. Their white coat allows them to camouflage with their environment, and, thanks to a thick layer of fat, it can withstand the low winter temperatures.

This small bird is one of the many endemic species in New Zealand. They have small, ‘circular’ bodies and can’t fly because they don’t have wings. They’ve also adapted very well to life on the ground, although they’re rather shy and only go out at night.

They have large beaks and feed on all kinds of small animals, especially insects and worms. Males are responsible for incubating eggs for ten weeks, after building underground nests. As soon as the offspring develop, they leave the ‘home’ to feed themselves.

Island Gigantism and Dwarfism: What Are They?
Island gigantism and dwarfism are fascinating phenomenon of evolution, and what happens when animals live in isolated environments like an island. Read on! Read more »
Link copied!
Interesting Articles
Wild Animals
Discover Nine Different Giraffe Species

The term polyandry comes from the Greek polýs (many) and Andros (man), and refers to the females of the animal…

Wild Animals
The Symbiosis Between Coral Reefs and Microscopic Algae

Coral reefs and microscopic algae are among the most diverse ecosystems on Earth. In fact, the Great Barrier Reef in…

Mammals
The Behavior of the Red Panda

Despite its nickname, the red panda has very little to do with the giant black and white bear with whom it shares its name and habitat. Red pandas are much more similar…

Animals
The Great Cetaceans of Our Planet

The great cetaceans of our planet are a group of aquatic mammals formed by some 80 species of varying sizes.…

Animals
Can Dogs Take Medications Made for Humans?

If there's one thing we'll never recommend, it's medicating your dog on your own. Any time you suspect your dog…