The Fascinating Process of the State of Cryptobiosis

Animals must adopt measures to ensure their survival when environmental situations become extreme. Entering the state of cryptobiosis is one of these measures. 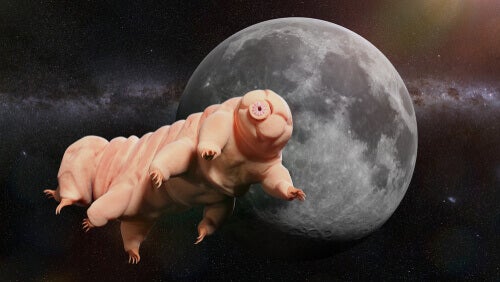 Did you know there are animals capable of completely inactivating themselves during extreme situations? It’s true! Some living beings enter a state of latency or cryptobiosis during which they don’t carry out any type of metabolic activity. It allows them to survive extraordinary environmental conditions such as desiccation, lack of oxygen, low temperatures, lethal radiation, or a combination of all of them.

We invite you to continue reading about one of the most fascinating processes in nature.

Inactivation for survival through a state of cryptobiosis

Cryptobiosis is a process carried out by some organisms when faced with adverse conditions. In this state, they stop their metabolic activity to neither reproduce nor develop until conditions become favorable again. Thus, it’s a reversible phase that some like to refer to as “resurrection.”

Some animals go through this state in order to be able to remain alive for long periods of time. We’re talking about indefinite periods of time — infinite, theoretically.

Numerous invertebrate animals such as embryonic cysts of crustaceans, rotifers, nematodes, and tardigrades possess this ability, in addition to bacteria. Researchers have also observed it in some plant tissues, seeds, propagules, and even in more sophisticated plants.

According to what they’ve seen, it seems the state of cryptobiosis allows organisms to be on the brink of life, but also of death. This is why some scientists consider it the third form of biological organization.

There are up to four types of cryptobiosis that depend on the extreme environmental situation that a given living being must endure:

This type of cryptobiosis occurs when a living being must endure long periods of desiccation and is characterized by the loss of water by evaporation. Through it, the animal loses more than 95% of their body fluids and suspend their metabolism.

An organism enters a state of cryobiosis when the temperature conditions are extremely low. This enables it to survive to freeze.

The cooling rate must be slow for this process to properly take place. The key to cryobiosis is freezing the living being, but avoiding the crystallization of liquids so as not to damage their internal tissues. Beings that experience cryobiosis can live for many years in this state.

This state is induced when oxygen levels in the environment are low and even non-existent.

Animals that experience this type of cryptobiosis are those that face a wide variety of salt concentrations.

Examples of animals who can enter a state of cryptobiosis

When the circumstances aren’t optimal for the development and growth of the larvae of these small crustaceans, the eggs go into a state of inactivation for a long period of time. Furthermore, it can last up to 10 years.

Thus, they can withstand extreme situations such as the absence of water and oxygen, as well as temperatures below freezing. During these states of cryptobiosis, the eggs encyst and stop all metabolic processes until the conditions of water, oxygen, and temperature become favorable.

Rotifers can enter a state of cryptobiosis

Rotifers of the class Bdelloidea are microscopic invertebrates that inhabit freshwaters.

These organisms can enter a state of anhydrobiosis under desiccated conditions. This is why they adopt a formation called “tuns” when the water evaporates. They reduce their body volume through it. This is because they compact their organs and make the light disappear from their hollow organs.

This is the most common cryptobiont organism.

Tardigrades, commonly known as water bears, are microscopic animals that inhabit both land, marine, and freshwater environments. The most surprising thing is they can enter all four types of cryptobiosis states:

This is just how the tardigrades become highly resistant to extreme environmental conditions such as:

As you can see, cryptobiosis is a fascinating process that allows the survival of certain animals despite the unfavorable environmental factors. This ability allows them to colonize environments or situations that are unviable for other organisms.

It is, therefore, an advantage in the animal world and one more example of the amazing natural processes that’ll never cease to amaze us.

Examples of Animals that Use Camouflage
Many creatures try to hide in their environment to avoid or confuse their predators. There's a group of animals that use camouflage to hide while hunting. Read more »
Link copied!
Interesting Articles
Invertebrates
The Cricket: Is It a Pest or Good Luck?