The Fascinating World of Ammonites

Ammonites are the most abundant fossil cephalopods on the planet. There are over 1,500 recorded genera who continuously arouse the general interest. This isn't only due to their beauty but also for their use as guide fossils. 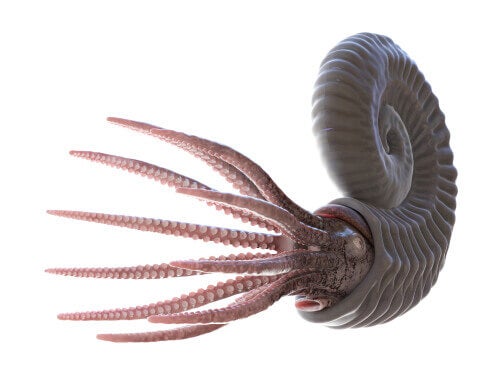 Ammonites are a rather successful type of prehistoric marine mollusk, from an evolutionary point of view. This is because they somehow inhabited the planet for more than 300 million years. There have been five mass extinctions during the last 500 million years on the planet. For this reason, over 90% of the organisms that one day walked, swam, flew, or crawled have disappeared from the earth.

Throughout the planet’s history, the group of the ammonoids survived several mass extinction events. However, only a few of their species remained. However, this handful of species managed to diversify in many different ways each time.

Ammonites became less abundant during the latter part of the Mesozoic era. None of them had survived by the Cenozoic era. Thus, the last lineages of ammonites disappeared along with the dinosaurs about 65 million years ago. That is, during the mass extinction event at the end of the Cretaceous period.

Surely, almost everyone has seen an ammonite fossil. This is because they’re quite widespread throughout the planet. Fossils formed as the remains of these animals became buried between the sediments. Then, they turned into rocks after these sediments solidified.

Thus, by being trapped in several layers of terrestrial strata throughout the planet’s history, ammonites are now useful indicators with which scientists can determine eras within the geological history. Using them this way is possible due to two of this animal’s characteristics:

Thanks to these characteristics, one can use ammonite fossils to distinguish geological time intervals of less than 200,000 years. In fact, this is very accurate in terms of the history of the Earth.

The classification of ammonites

Extinct animals, like living animals, are classified into taxa, genera, and species. Thus, ammonites fall under the classification of cephalopods of the Ammonoidea subclass. So far, there are nine orders of ammonoids recognized: five from the Paleozoic era and four from the Mesozoic. We’re talking about a total of 10,000 species of ammonites.

Today, their closest living relatives are of the cephalopod class: octopus, squid, cuttlefish, and nautilus.

What do we know about the shells of the ammonites?

According to fossil records, ammonites have a spiral-shaped shell. Its most important functions were to offer protection against predators, and the animals also used them to help themselves float. They built new chambers in the shell as they grew, and each one was internally separated by a septum.

This structure provided strength to the shell and kept the animal from being crushed by the external pressure of the water. Scientists believe that ammonites couldn’t withstand depths of more than 330 feet though. At least according to some estimates.

It’s interesting to note that this animal lived only in the outer chamber of their shell. The internal chambers were full of air or fluid. In fact, the ammonite regulated them to control their buoyancy and movement. This is similar to what happens in a submarine.

Additionally, these shells varied greatly in their surface. Some were smooth, and others had spiral ridges, ribs, or even spines. Even though the spiral is their most typical shape, some genera of ammonites had shells that curled in the strangest shapes. We refer to this as a heteromorph.

What was the appearance and life habits of these creatures?

Scientists also presume that the ammonites moved through the warm shallow seas, using both jet propulsion and the buoyancy of the internal chambers of their shell.

Another curious fact is these creatures might have been unisexual (they had separate male or female sex characteristics) and fertilized internally. Researchers identified this from among the secondary sexual characteristics that affect the structure and shape of this animal’s shell.

Was there a gigantic ammonite?

The ammonites underwent several changes throughout history. The largest documented ammonite species was the Parapuzosia bradyi, from the Cretaceous period. The specimens measured about 54 inches in diameter and populated the American continent.

However, the size record currently belongs to the Parapuzosia seppenradensis species, also from the Cretaceous period. It was about 77 inches in diameter. Estimates indicate that this specimen, found in Germany in 1895, would have reached a diameter of approximately 100 inches later in their life.

In addition, there are also some tiny ammonites. The Cardioceras lived during the Late Jurassic period. The adults in this species are rarely over 3/4 inch in diameter.

People have been collecting beautiful fossil ammonite shells for thousands of years. They turned them into protagonists of all sorts of myths. For instance, medieval people believed they were snakes that had been turned into stone. In fact, the fossils had commercial value and pilgrims bought them.

However, their use for determining the dates of marine sediments with precision makes them essential for acquiring more geological knowledge of our planet.

Why Are Cockroaches Believed to Be the Oldest Insect?
Cockroaches are said to be one of the oldest insects on the planet. This is because fossil remains have been found that are more than 200 million years old! Read more »
Link copied!
Interesting Articles
Invertebrates
Discover How Worms Reproduce