The Giant Insects that Once Ruled the Planet

Did you know that giant insects once reigned over the Earth? Fossil records indicate that large dragonflies populated the planet millions of years ago. 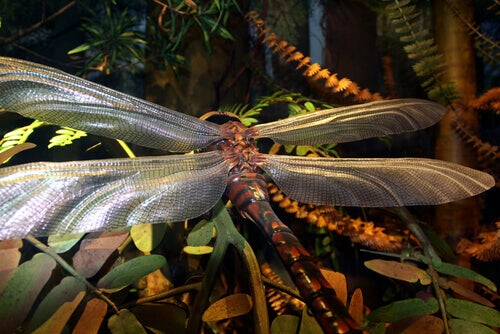 Millions of years ago the sky was covered by giant flying insects — a rather larger version of the current dragonflies. As you can imagine, the atmospheric conditions were quite different from those we know today and it impacted the development of the animals.

Researchers continue to explore hypotheses to explain why these giant insects disappeared and why they’re now so small. However, it seems the answer lies in the evolution of the predatory birds during that time. These animals acquired new and successful ways of capturing their prey.

Continue reading to find out more about how these insects got to be so big and what led to their extinction.

Usually, animal size is the result of the relationship established between their body and the physiological and ecological characteristics of their environment.

During the Carboniferous period (at the end of the Paleozoic era), there were insects of very different magnitudes than those we know today. The Protodonata is an example of an order of extinct giant insects.

They were flying, looking similar to dragonflies, and some of them were as big as an eagle. Thanks to the fragments of wings recovered, we know that some of them reached up to 28 inches in diameter.

Protodonates are the largest known group of insects to ever inhabit the Earth. Meganeura, Megatypus, and Meganeuropsis are the best-known genera among them.

The appearance and disappearance of giant insects

After the discovery of the fossil remains of these arthropods in 2012, scientists from the University of California (Santa Cruz) speculated on the influence of various factors. They tried to explain how these beings reached such a size and what led to their extinction.

The amount of atmospheric oxygen was higher during the Carboniferous period than it is now. The oxygen required by an organism depends on its body size. That is, the larger the animal, the more oxygen it needs.

Unlike other ectothermic animals (those that regulate body heat from the environment), insect breathing takes place through a system of tracheas. That is, oxygen diffuses through branched tubes that irrigate the entire body.

The flying insects of that era had to adapt to the various oxygen concentrations as they expended a lot of energy moving their wings. Due to this, one of their first physiological changes happened in their respiratory system.

Thus, this could explain that animals were larger because the concentration of oxygen of that era was of 30% (higher than the current 21%).

There’s another possible reason for the size of prehistoric giant insects. We’re referring to competitive interactions for food with other flying insects and vertebrates:

Everything indicates that predation probably controlled how large animals would become.

These insects became progressively smaller, even though the concentration of atmospheric oxygen increased in the subsequent Mesozoic era, during the early Cretaceous period.

This fact supports the hypothesis that the predation of other flying animals is the reason why insects decreased in size. In fact, it coincides with the moment in which the birds improved their physiological structure and, with it, the ability to capture their prey.

It’s true that oxygen influenced the size of giant insects from the Carboniferous to the Triassic. However, as scientists Clapham and Karr point out in their research, it seems the interactions of insects with predatory birds and their improved maneuverability were the deciding factors.

Thus, the evolution of these birds was responsible for this event, displacing the explanation of oxygen as the main factor.

A gap in time

Despite the fascinating findings obtained from fossil records, the authors aren’t convinced. They wonder whether it really was predation that caused the demise of the giant insects, and not some other factor.

This uncertainty is due to insufficient information from the fossil record over 20 million years old. Therefore it’s impossible to know exactly when this event occurred.

We think these scientists aren’t too far from the truth – even though this gap in time makes it difficult for us to know the answer for sure.

After all, it makes perfect sense that the period when birds became more agile coincided with the decrease in the size of these insects.

The Giant Swallowtail: The Biggest and Most Exotic Butterfly
The giant swallowtail or Papilio cresphontes is an amazing butterfly. It looks very exotic and is found in large numbers across North and South America. Read more »
Link copied!
Interesting Articles
Invertebrates
6 Curious Defense Mechanisms in Insects