What Are the Differences Between Octopuses and Squid?

Octopuses and squid, although they may seem to have the same characteristics, actually differ in many aspects. For example, their size, behavior, reproduction, feeding, hunting, and water movement techniques. 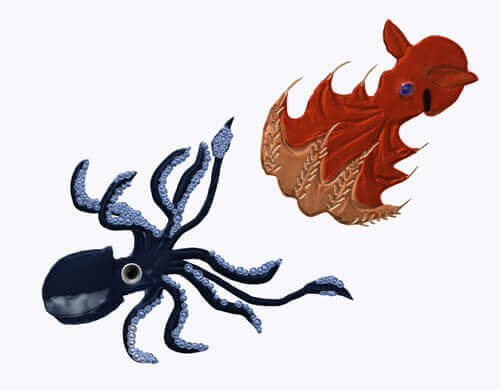 Although both octopuses and squid belong to the same family and have several characteristics in common, there are differences that are worth noting. Find out what they are in the following article.

Differences between octopuses and squid

Both are cephalopod mollusks, that is, animals that have their ‘feet on their head’ and their body is divided into three parts: Head, neck and trunk. Although they share many characteristics, there are differences between octopuses and squid that you should know:

Octopuses are animals with solitary habits most of their lives, and females and males only gather to reproduce. On the other hand, squid can live both in groups and alone. In regard to life expectancy, the octopuses don’t live as long – between one and three years. Squid, however, can live for five years.

Octopuses are omnivorous, so they feed on animals – mainly crustaceans and fish – and algae. In order to get food they move their eight arms as if they were worms and attract prey. They can also sink their beak-shaped mouth into the shells or bodies of other animals.

In the case of squid, they’re 100% carnivorous and their diet’s made up of fish and invertebrates, which they capture between their tentacles. They eat quickly and voraciously.

Although both species can be of considerable size, the octopus is much smaller than the squid. An octopus is, at most, 16.5 feet long, while squid can reach 65.5 feet in length.

Another difference between octopuses and squid is that the latter has an internal shell that’s formed by a thin, flat piece attached to its body.

Squid have an organ called the hyponome, which allows them to move after expelling water under pressure… and they can be very fast! The octopus, in contrast, moves slowly with the help of its eight suction cup tentacles.

Male octopuses have a special arm for reproduction – known as hectocotylus – which allows them to transfer sperm to the female. The female fertilizes the eggs and deposits them in a specific space in the burrow. She then remains next to the ‘babies’ to prevent them from being eaten by predators, and dies just as the eggs hatch.

Squid mate in groups and place the eggs among the algae or on the bottom of the ocean. Like their ‘cousins’, the females also die after the birth of their young.

Squid prefer to live in the open sea and at a maximum depth of around 3300 feet. Octopuses, however, opt for caves and sea burrows, between coral reefs, under rocks, or near the surface.

What characteristics do octopuses and squid have in common

Besides belonging to the same family and having tentacles with suction cups, octopuses and squid have several characteristics in common. One of them is their intelligence. Both species are considered to be among the most astute animals, because their nervous systems are highly developed.

They have the ability to solve problems, get out of mazes, and identify shapes.

What strikes scientists the most in analyzing octopuses and squid is that they learn everything they know without the help of anyone. Since their fathers ‘disappear’ after copulation and the mothers die just before the babies are born, they have no one to teach them.

This is why it’s so interesting that, for example, they can camouflage themselves and blend in so well with their surroundings or that they can hunt so skillfully. Finally, another of the qualities that octopuses and squid have in common is that both can produce a toxic ink, which allows them to escape from danger.

The Amazing Truth About the Squid’s Genetic Code
Squids are extraordinary animals with some amazing abilities, but today, we'll look at the squid's ability to change its genetic code. It's truly amazing! Read more »

Link copied!
Interesting Articles
Invertebrates
How Much Do You Know about Army Ants?

Sea stars (or starfish) are invertebrate animals characterized by five arms that end in a point. They're named after their…