5 Species of Whale, the Giants of the Ocean

These cetaceans live in most of the world’s oceans, although some of them are in danger of extinction due to hunting; among these is the blue whale, the largest animal on Earth 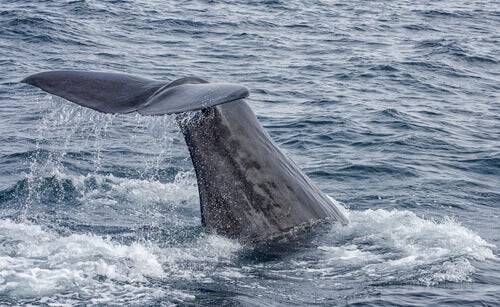 The largest family of cetaceans are known as whales and they inhabit most of the world’s oceans. In this article we’ll tell you about some species of whale, these giants of the seas.

Members of the whale family are characterized by the folds in their throats, which expand dramatically when they feed (they swallow large amounts of water and filter it through their baleen plates). Another typical trait of the whale species is that their skull is totally flat and straight. Here are some examples:

These are the second largest animals on the planet (after the blue whale), and can grow to 80 feet long. Their bodies are gray with a whitish belly and, despite their size and weight (around 80 tons), they’re quite slender.

Fin whales – like the one in the image at the top of this article – live in the Atlantic Ocean and are in danger of extinction due to hunting, especially on the coasts of Japan, Norway, and Iceland. As for their diet, they mainly eat krill, small fish, crustaceans, and squid.

The largest animal in the world, these whales are more than 90 feet long and they weigh 110 tons. Their bodies are sleek, and they’re blue with a light-colored belly. They have filters about 3 feet long at the sides of their mouths that allow them to filter water and eat up to four tons of krill per day.

The blue whale lived in all oceans until the 20th century, but today they’re mainly seen in the Atlantic and the North Pacific. They’re in danger of extinction due to hunting. Not much is known about their behavior. Among the things we do know is that females give birth to only one calf at a time after 12 months of gestation, and that they sing at high frequencies.

Also known as the dwarf whale, this is the smallest of the fin whale species (they’re less than 35 feet long and weigh around 10 tons), as well as the fastest. It gets its name because its body is white at the ends and black in the center; they’re very compact and have thin pectoral fins ending in a point.

The minke whale lives in the northern hemisphere and moves around the different seas in search of food (it filters the water through more than 300 filters), and also to mate or give birth.

Another small species, the tropical or Eden’s whale is a cetacean whose body is dark grey, except for the belly which is yellowish-white. They are about 40 feet long and have three parallel crests between their head and their spiracle, or blowhole. They have very small fins compared to their body, and their dorsal fin is sickle-shaped.

Although this marine species is solitary, they congregate with other individuals where there’s an abundance of food. They swim at great depths at speeds of up to 18 miles per hour, and prefer the warm subtropical waters of the Indian and Pacific Oceans. As for their diet, they mainly eat fish, crustaceans, octopus, and squid.

The Antarctic minke whale is one of the few that lives only in the southern hemisphere. During the summer it stays in Antarctica and, when winter arrives, it moves north, although not beyond the Equator.

The Southern whale is one of the smallest, measuring a maximum of 34 feet–females are larger than males–and weighs about 10 tons; its back is black and its belly white.

9 of the Best Places to Spot Whales
They're the largest animals in the world and a spectacular sight to behold when migrating. We'll tell you about some of the possible places to spot whales. Read more »
Link copied!
Interesting Articles
Mammals
All About the Caracal: Characteristics, Feeding and Habitat