All About Affectionate Behavior in Otters

As solitary animals, the affectionate behavior in otters is limited to breeding. In the following article, we'll tell you more. 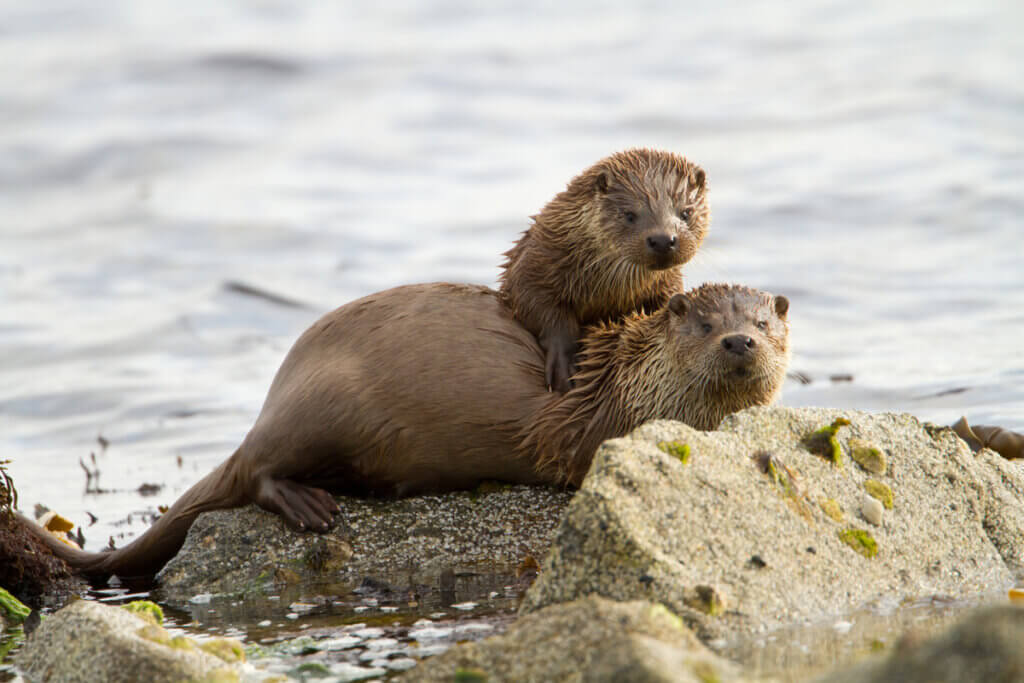 With a primarily solitary nature, the affectionate behavior in otters centers basically on the relationship between mothers and their pups. Adult individuals, both males and females, spend their days in solitude. Although they may share a spatial territory, they avoid seeing each other outside the mating season.

Beyond this hermitic character, female otters must take care of their offspring to ensure their genetic permanence in time. If you want to know more about these special behaviors, we invite you to keep reading.

Characteristics of the otter

The common Eurasian otter (Lutra lutra) is a mammal of the mustelidae family. These animals are small in size, have waterproof coats, and are agile swimmers. Although their legs are short, they have a long tail that helps them move in the water, their natural environment.

Otters live in rivers, lakes, lagoons, and marshes throughout the European and Asian continents. However, due to water pollution and the destruction of their natural environment, this mammal taxon is a threatened species.

Like the rest of the mustelids, otters usually become active at dusk or nightfall, when they take the opportunity to hunt fish or macroinvertebrates. They occupy the rest of the time resting in their burrows – they tend to have several outside the water.

As we mentioned above, otters live a very solitary life. Once they leave the care of their mothers, they embark on a hermit’s life until the time comes for them to reproduce. This can happen at any time of the year, once the individual reaches adulthood and goes into heat for the first time.

At this time, the otters leave the night and begin to go out during the day. When they form a couple, courtship begins. This can last several days, during which time the female and male don’t separate.

At these times, the otters play constantly, chasing each other through the water and preening each other. We could say that, apart from the mother-child relationship, this is the only affectionate behavior among adult otters.

Affectionate behavior between otters and their cubs

After copulation, the adults go their separate ways and the gestation period lasts approximately nine weeks. Births, like estrous cycles, can occur at any time of the year, although there’s a greater tendency in spring or early summer.

Usually, each female has between two and three pups, but she can give birth to as many as six. Mortality in the first months of life is very low, so almost all the pups grow old enough to abandon their mother.

Like many mammals, especially carnivores, otter cubs are born with their eyes closed and don’t open them until the fourth or fifth week of life.

From the time they’re born until they’re a little over two months old, the cubs are totally dependent on their mother’s care. The latter will spend hours suckling, grooming, and protecting them.

At seven weeks, the little otters will come out of their burrows for the first time. The mother’s in charge of teaching the cubs how to get along in the world. To teach them to swim, a mother will carry her babies on her back to the middle of the river. Once there, she releases them to return to the shore by themselves.

The lactation period for otters lasts between six and eight months. And, after this time, the cubs will leave their mother to start a life on their own.

Can otters be affectionate toward humans?

First of all, otters are wild animals that are very threatened by the destruction of their habitat. Therefore, they’re protected by the international CITES agreement (Convention on International Trade in Endangered Species of Wild Fauna and Flora). Due to this law, otters can’t be kept as pets or trafficked.

At the same time, otters may appear to be tender and adorable animals, but they’re wild beings that, when they’re in heat (a large part of the year) they become really aggressive.

There are places in the world where these animals and local human populations live together. Otters are truly intelligent beings and aren’t afraid to approach people in search of food or other resources. Despite this, they won’t hesitate to attack if they feel threatened.