While perhaps primates don't speak verbally, they're able to communicate through gestures and sign language. Additionally, several experiments have shown that they can understand spoken language and associate words with objects. 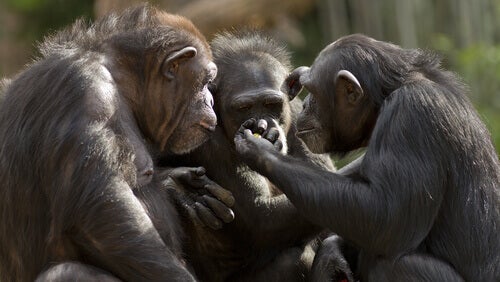 Can monkeys talk? This is one of the most common questions people always ask about primates. Sure, monkeys can’t speak English, but there are other ways we can communicate with primates that might surprise you.

In fact, a team of scientists recently proved that two great ape species, the chimpanzee and bonobo, use gestures to communicate, and their gestures share meanings. Some scientists even hypothesized that a chimpanzee could communicate with a bonobo through gestures.

Of course, this finding indicates that primate ancestors used gestures, some of which are probably similar to the ones humans use to communicate. This detail is groundbreaking and shows that the idea of speaking to monkeys and other primates really isn’t so far off.

After the 1970s, there were still many questions surrounding the origin of human intelligence and language. By this time, we already knew human beings didn’t evolve from monkeys in the literal sense, and that we weren’t the only animal species to use tools.

The case of Washoe

One of the most famous ASL studies was with Washoe, a female chimpanzee. Psychologists Beatrix and Allen Gardner asked themselves the question, “Can monkeys talk?” and communicated with the young chimp for years exclusively through ASL. Washoe’s case is probably the most revolutionary in supporting sign language as a way of communicating with primates.

While working with psychologists, Washoe learned around 150 words and could communicate perfectly. An interesting finding was that Washoe even signed while asleep, which demonstrated that monkeys have dreams about real-life situations.

Washoe learned how to apologize and express emotions like joy or sadness. She also invented new words to talk about objects, taught the language to another chimpanzee, and even maintained a conversation with it.

Koko and Chantek, other talking monkeys

A similar experiment with the gorilla Koko, who after three decades learned more than 1,500 words, is equally impressive. The big difference in these studies is that chimpanzees become very aggressive during adolescence. Therefore, Koko’s case is one of the longest experiments of its kind, leading to its success.

Similar to other cases, Koko understands spoken English and responds with sign language. She can also recognize herself in a mirror and express emotions.

Chantek, a big inventor of words, is another one of the most famous cases. Like other primates in similar experiments, researchers raised this orangutan like a human child.

Lexigrams, another way to talk to primates

Other scientists have carried out experiments with methods of communication outside of sign language, like lexigrams. A study with the chimpanzee Lana was incredible, as she was able to connect grammar sequences and invent new words.

Lexigrams are symbols that represent words and allow the user to give meaning to an image without needing a concrete language. Using screens, animals can select the lexigram of their choosing.

During the 1980s, researchers began a project with Kanzi, a bonobo that learned how to use lexigrams from her mother. As it turns out, Kanzi not only created words, but also built tools, made carvings and instruments, and was quite skilled in mathematics. Thus, the answer to the main question here – can monkeys talk? – is a resounding yes.

The ethics of communication experiments with monkeys

While it’s true that these types of experiments have allowed us to make remarkable findings, it’s important to ask ourselves if this type of research is ethical. Keeping a monkey as a pet isn’t a good idea and experts have proven time and again that it’s detrimental to the animal’s mental and physical health. Similarly, raising a primate specifically to teach them a language is also harmful.

In order for the primates to be docile and learn easily, they’re separated from their mothers at a young age. Additionally, being raised by humans makes it nearly impossible for them to be reintroduced to their species after the experiment ends.

In particular, chimpanzees become increasingly more aggressive as they get older, therefore the experiments we mentioned above had to end when the animal was around six years old.

Some of the animals who were the subjects of similar research have experienced some of the worst of human behavior. An example of this is Nim, a chimpanzee similar to Washoe, who was sold to be the subject of invasive animal testing and died from a heart attack at 26 years old.

On the other hand, some primates like Koko lived with all the comforts human life has to offer. However, given the opportunity, perhaps these animals would have chosen to live with their kind in the wild.

So, the next time you hear the question, “Can monkeys talk?” you’ll be able to share what you learned here about this controversial topic. While these experiments have provided us with fascinating insights into primate communication, it’s important to remember they were done at a high cost to the subjects.

Pet Monkeys – Why Is It a Bad Idea to Have One?
Like most exotic animals, the maintenance costs of pet monkeys are quite high. But there are many other reasons why it's not a good idea to have one. Read more »
Link copied!
Interesting Articles
Mammals
Elephant Graveyards: Myth or Reality?