Characteristics and Behavior of the Capuchin Monkey

The capuchin monkey is small and originally from the American continent. These animals make tools and use them to forage for food. 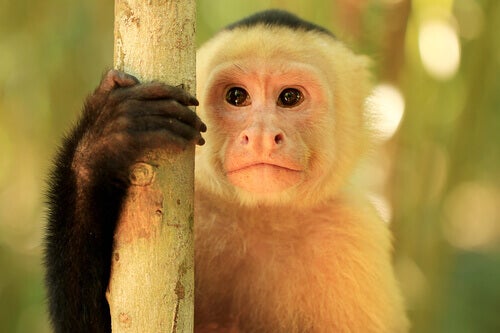 Researchers claim the endangered capuchin monkey is one the most intelligent primates as owing to their observations in its behavior and high capacity for learning. Today’s article will discuss this species in detail.

Characteristics and habitat of the capuchin monkey

Their long tail is almost as long as their torso and is prehensile. What this means is they can “grasp” tree branches and hang from them. Furthermore, the capuchin monkey’s body is black up to the shoulders and then white from the chest up. People named them after the monks of the Capuchin order as they wear dark robes with lighter hoods.

There are four subspecies of capuchin monkeys within the Cebus genus. All of them are small and seldom grow over one yard. Also, they weigh no more than 9 pounds. Some people refer to them as “white-face,” although it’s actually pink.

These monkeys have adapted to the various types of forests throughout the American continent such as Honduras, Panama, Costa Rica, Nicaragua, Colombia, Ecuador, and Brazil.

In addition, they feed on fruit, vegetables, nuts, seeds, shoots, and small vertebrates and invertebrates such as crabs, crustaceans, frogs, bird eggs, insects, and lizards. As you can see, they’re omnivores.

This primate can use certain tools to search for food and can also build utensils. This is why humans consider these animals to be highly intelligent. It’s also because their brain is larger than that of some larger monkeys. Some people have spotted them grinding caterpillars to smear on their backs as an insect repellent.

They usually live in groups of up to 20 individuals and are most active between 5 and 9 am and between 3 and 5 pm. They chill down the rest of the time. Furthermore, they spend many hours among tree branches and only come down to the ground to drink water.

These animals can walk and run on all fours and can also climb, hop, run, and jump from branch to branch. Their territory covers between 30 and 90 hectares and they often travel up to two miles in a single day in search of food or water.

Females form separate groups from the males. The latter visit them during the breeding season, and there’s always one alpha or leader. This guy maintains this position for about 17 years and is the only one who copulates with the females.

Like many primates, Capuchin monkeys mate among members of the same family and are fertile from the age of seven. They reproduce seasonally between December and April, gestation lasts six months, and they give birth to only one offspring. The mother carries the young on her back until the age of six months and breastfeeds until they’re one year old.

Predators and hunting of the capuchin monkey

The main predators of these animals, due to their size, are the tree boa, the spearhead snake, the caiman, the jaguar, and the ocelot. In some cases, the harpy eagle may catch one of their babies.

Thus, in order to warn their family of danger, capuchin monkeys scream loudly and run quickly. In few instances, they’ll go ahead and confront the predator.

Finally, this species is a victim of illegal hunting and wildlife trade, a common practice in some parts of the American continent. In addition, there’s a high rate of deforestation of their native forest and jungle habitats.

What this means is that the population is on the decline and some of the subspecies are in critical danger of extinction. Such is the case of the yellow-breasted, Kaapori, and blond capuchins.

The Social Structure of Monkeys
The social structure of monkeys serves to guarantee a group's survival by promoting the reproduction and protection of their young. Read more »
Link copied!
Interesting Articles
Mammals
Meet the Squirrel Monkey